Gov Ihedioha And Connection With A Fraudster: Birds Of A Feather Flocks Together 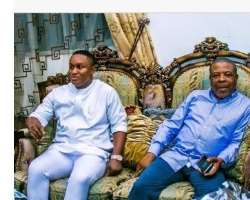 In order to anchor this article on the part of truth, it will be reasonable to cite the Biblical proverb that “any house with faulty foundation cannot stand”. Going by the public condemnation of His Excellency, Rt. Hon. Emeka Ihedioha over his alleged glued hobnob with an American tagged fraudster, Mr. Chika Augustine Odionyenma. It will be immaterial, insensitive and cantankerous for a sane person to begin to defend his abysmal failures on arrival.

This revelation proved that most politicians have watched their hands with blood; a typical example is what Governor Ihedioha will soon tell Imo people. This action of our amiable Chief Executive Officer of the state raises some pertinent questions as to how the present administration could perform credibly well having started the journey of governance on a faulty ground.

The words of wisdom has it that birds of a feather flocks together. Quite obvious that it has become unjustifiably undeniable for Governor Ihedioha to be presumed innocent of the whole brouhaha bedeviling Mr. Odionyenma as his closed friend and co-money bag whom he made an ATM machine to succeed during his electioneering campaigns.

Consequent upon these, a conscious mind will begin to probe whether Governor Ihedioha still has the capacity to deny been a “fraudster” as the case maybe after reaping from the fruits of a fraudster? Is it out of place for our Governor to have appointed an American tagged fraudster as member of his inauguration committee if he does not know his source of income? How possible for Governor Ihedioha to deny receiving any “stolen” loot from Mr. Odionyenma either directly or indirectly? These posers remain for Governor Ihedioha to clarify to Imo people to ascertain whether he was wrongly or rightly elected as Governor.

If these questions are left unanswered within 72 hours by our Governor, members of International League of Media Advocacy Against Corruption (I.L.M.A.A.C)will have no option than to resume “Critical Media Analysis” of Governor Ihedioha’s past and present roles in corruption.

It is no longer news that Hon Ihedioha started very poorly as Governor among his contemporaries since the inception of Imo State. Prior to the coming on board of the present administration led by an Aronta Mbutu Aboh Mbaise born former federal Lawmaker, past Governors had recorded and showcased myriads of achievements under 100 days in office, but that of Ihedioha is set to be witnessed as a very big flop and disaster in few days.

The reason why Ihedioha cannot succeed as Governor is because of his desire to critically poke-nose into every activity of past governments in the state. A serious minded government ignores the past and faces the present for record purposes, but in his case, the reverse has remained the ritual. It will not be out of place that apart of from Mr. Odionyenma, the most wanted American listed internet fraudster in the world, Governor Ihedioha may be sponsoring others to be financially buoyant to be able to raise funds for his election cases in courts.

Little wonder why the Governor has continued to use the rain to give excuses to Imo people to cover up his abysmal failures in governance while the major road leading to Mbaise, his country home is undergoing minor touches after abandoning others proves his level of sectionalism and primitivism.

No doubt, Governor Ihedioha should have been aware of the myriads of expectations of Imo people who elected him, instead of paying undue allegiance to fraudsters whom he may soonest, cede Imo tax payers’ money as a thank you message for their role during the 2019 election in the state.

In summary, owing to the level of public outcry over our Governor’s close relationship with Mr. Odionyenma, a notorious internet scammer, until Hon Ihedioha clarifies the notion that “he only follows the goat to the farm but does not eat the yam like the goat”, Imo people and Nigerians at large will continue to see him, call him and address him as a fraudster who finds joy hobnobbing with “criminals” of note.

Ikenna ONUOHA is a Media and Public Relations Consultant. He is the State Publicity Secretary, Imo Concerned Citizens (ICC).