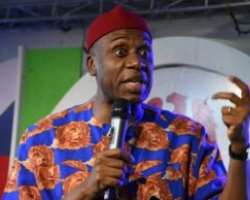 The Minister of Transportation, Rotimi Amaechi, weekend said the completion of the rail projects in the country, particularly the Lagos-Ibadan railway construction will reduce the Apapa gridlock.

Amaechi also disclosed that groundbreaking of a Transport University in Daura, President Muhammadu Buhari's home town will hold in September.

He spoke during the inspection of the rail project.

According to him, the federal government expects that the contractors handling the key road construction projects will be fast so that the gridlock will be reduced.

He said that the federal government will build a factory at Kajola, Ogun state for the production of rail wagons and coaches.

He added that this will be followed by locomotives late

The minister said the mesures were meant to reduce importation of equipment from China.

He explained that the slow pace of work on the rail project was as a result of lack of funds.