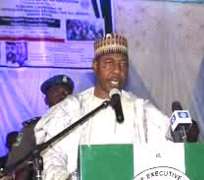 Gov. Babagana Umara Zulum, of Borno State has reiterated his commitment and zeal towards completing all ongoing projects initiated by the previous administration.

Zulum who made this known Saturday during his maiden meeting with the newly appointed state commissioners at the Government House Council Chamber Maiduguri. He equally urged all the commissioners to do everything possible to complete all ongoing projects under their ministries.

The governor further said that his administration will provide maximum support and cooperation to the commissioners to enable them implement policies and projects that will improve the quality and living standards of the people.

He further urged all the commissioners to take into cognisance the 2020 budget very critically and make good plans for effective implementation adding that they should all liaise with the secretary to the state government and the chief of staff for an articulated budget of their ministries in 2020.

The governor then thanked all the members of the state executive council for accepting to serve under his administration adding that they should feel free and be transparent and work as a team for the wellbeing and development of the state.

At the end of their maiden meeting, the State Commissioner of Information, Alh. Babakura Abba Jato briefed the journalists on the outcome of the meeting.

He said the governor told them that what the state needed most now is provision of security to protect lives and property of the citizens, adding that, Zulum said development can not take place without proper security while urging them to work assiduously to achieve that.

Jato added that, every commissioner has been directed to have a work plan that can add value to the present administration's policy thrust and bring development to the state adding that they are equally reminded to operate an open door policy and liaise with their staff in the ministries for greater output .

The Information Commissioner also stressed the important role of the media in any government while calling on all the working journalists in the state to give their maximum support to Prof. Zulum led administration and shun all forms of negative reportage by seeking clarification where necessary to balance up their stories.

He also said the commissioners assured the governor that they will come up with ministerial zero budget proposals that will bring positive development to the state through prioritization of their respective ministerial projects that will impact positively on the people of the state.