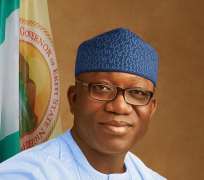 Ekiti State Governor, Dr Kayode Fayemi has charged the Nigerian media to rise above its traditional role of news reportage and start promoting social justice and holding government accountable for its policies and programmes.

Delivering a paper titled Excellence in Governance: “Exploring a Synergy between Think-tanks and Mass Communicators” at the first Governors’ Lecture of the Department of Mass Communication, University of Lagos, the Governor stated that the media should quit its adversarial tradition, become less antagonistic and start being highly critical in setting agenda for good governance.

The maiden lecture which also featured the public presentation of a new book “ Introduction to Philosophy of Mass Communication, was attended by journalists, journalism teachers, students and public relations practitioners as well as members of the public.

Dr Fayemi who called for a deliberate shift from market-driven sensationalism to development- driven reportage, said there is need to deliberately train media practitioners in policy development, implementation and evaluation; adding that speculative and sensational journalism serves no good other than creating fickle excitement which subsequently engenders mental paralysis.

He noted that research has shown that consistent exposure to negative news brings apathy, hopelessness and cynicism among the populace.

"Communication has a great role to play in promoting good governance. In order to play this role, the Nigerian media must rise above the traditional role of information, education and entertainment to promote social justice and hold government to account. The media should set agenda for good governance and ensure discussion on issues of good governance. Politics is too important to be left for charlatans and practitioners with shenanigans. The media should encourage more decent people to get involved in politics as the penalty for refusing to participate in politics is that you will be ruled by your inferiors.

"Again, we need to reset our communication philosophy around participation and collaborative development rather than predation on scandals and woes. In our own experience in Ekiti State, we find that positive human connection stories from government gets massive public support and acclaim so we work to establish continuous contact between government and the people. In governance, communications is much more than media coverage and publicity. It involves the right message, appropriate timing, appealing tone, and the most effective channels", he said.

Speaking further, Dr Fayemi, who is Chairman, Nigerian Governor’s Forum (NGF), urged the media to return to investigative journalism that can open governments secret records to external scrutiny and hold authorities accountable for their actions.

He said the media can play an important role in promoting transparency and public scrutiny of decision makers by highlighting “policy failures, maladministration by public officials, corruption in the judiciary and scandals in the corporate sector".

Fayemi however faulted the idea of “commercial news”, which is fast gaining ground in broadcast media, describing the trend as a major threat to good governance. He pointed out that the media seems to have surrendered its independence to paid news , adding that paid news gets the citizens deceived.

"The advent of commercial news or commercialization of news therefore, is a serious threat to democracy and good governance. It affects the democratic process in various ways. Firstly, with paid news, the media is compelled to surrender its independence. A media without independence is nothing more than a propaganda pamphlet. Secondly, with paid news, the media deceives the citizens. The reader of the press or the viewer of the television is betrayed into believing that what is basically an advertisement is in fact independently produced news content. Ultimately, this practice does harm to the decision making process in a democratic society."

"How can people judge the government without proper information? The third important information is related to media role in protection of human rights. No market regulated media can discharge their responsibility to the masses," he stated.

Earlier, the chairman of the occasion, Prof. Ralph Akinfeleye had said that there cannot be sustainable democracy without free press.

In his remarks, the Vice chancellor of the university, Prof Oluwatoyin Ogundipe said the varsity is setting the pace by making the department of Mass Communication one of the best in the continent, even as the department now has a television station which would enhance professionalism of student-communicators.

Prof Ogundipe thanked Governor Fayemi for his belief in the media as a major stakeholder in good governance.