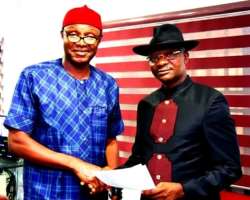 Determine to address issues headlong, the commissioner for Information, Delta state, Mr Charles Ehiedu Aniagwu, has posited that his major task is to make friends for the Chief Security Officer of the state, Dr. Ifeanyi Okowa and the state in general.

He made this assertion Friday 23rd August, 2019, when members of the Nigerian Institute of Public Relations (NIPR), Delta State Chapter paid him a courtesy visit in his office in Asaba.

Aniagwu who so much appreciated the visit, pledged to partner the Institute in promoting positive image of the State to the world, adding that the visit was more of a friendly affair.

According to him, "There are so much grounds to cover, even though my predecessor did a lot to reposition the Ministry. I am seriously getting myself acquainted with the routine schedules of office. However, when your request came, I had to shelve every other thing to receive you, knowing the importance of such a body to the administration of Governor Okowa and the relevance it would attach in easing the job of proper information and reputation management."

"My major task as Commissioner of Information is to make friends for the Governor and manage information for the peace and progress of the state. I need everybody for this task, except that we will not condone those who are not ready to work and drive the process with us but appearing under the pretence of we are all involved."

"While we will not relent in our drive to reposition the Agencies under the Ministry of Information in line with the image and policy thrust of the state; it will be our pleasure to partner and collaborate with the NIPR to market our Stronger Delta product", he affirmed.

The renowned resourceful broadcaster who was presented with the NIPR admission form, however, accepted the invitation for membership into the Institute. He narrated how he made efforts to join the Institute immediately after school but was not successful do to other engaging factors; nonetheless, he appreciated the Delta State Chapter for honouring him with such a rare privilege.

Earlier in his speech, the Chairman of the Institute in Delta, Chief Patrick Ukah who was represented by the Secretary, Mr Godfrey Osakwe congratulated Aniagwu for attaining such a height of becoming a Commissioner within the political space of Delta State.

Defining PR and what the Institute stands for in Nigeria, the Chairman also gave a run down of activities of the State Chapter, stating how Chief Ukah resuscitated the Chapter through the backing of the National Body, led by Mr. Oladele Rotimi at the time.

Osakwe affirmed that as at today, NIPR Delta State Chapter remains a reference point as one of the most outstanding Chapters in terms of membership.

He however, averred that in terms of performance, Delta was still lagging behind, but could raise the bar through professional engagements. He noted that as a result of this challenge, the Chapter had initiated to host the November edition of the Institute's membership induction in line with the Chapter's AGM during which the Governor would be invested as the Chapter Patron.