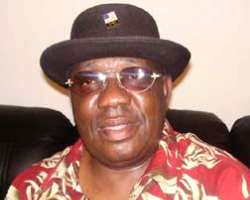 Investigations revealed that Barrister, who has been in and out of the hospital in the past three years, was flown to a popular hospital in India where he was operated upon. Though members of his family are keeping sealed lips over his ailment, a source told P.m.News that Barrister is suffering from a heart related disease due to his weight and other complications.

Investigations further revealed that after seeking medical attention overseas without improvement the pioneer fuji star is back in the country and he is currently on admission at a private hospital named Havana Hospital, Surulere, Lagos, Nigeria. A hospital source told us that Barrister's condition is yet to improve because he hardly recognises visitors who were able to see him and can hardly stand or seat without being aided.

Barrister had once complained about a troubled leg as a result of an injury he sustained during his days in the Nigerian Army among other minor health issues which made him relocate to the United States of America.

Lately, he hardly plays for long hours and he has been sitting during few live shows he honoured in Nigeria. His friend Alhaji Kolington Ayinla aka Kebe'N' Kwara and other top musicians have visited him in the hospital.

Yesterday, the President of Fuji Musicians Association of Nigeria (FUMAN), Alhaji Saka Orobo Odunsi called on his colleagues to help in praying for the ailing fuji star.