Abba Kyari; A Need For Reflection 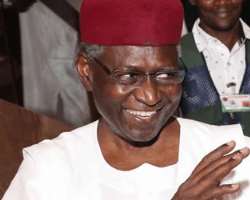 I have read with dismay reactions of Nigerians following the directive that was given by the President to recently sworn-in Ministers what in the ordinary sense is the normal procedure to observe in having engagements with him (Buhari) considering how stringent his daily schedule would be. One thing that cannot be taken away from the rage of reasonable number of these persons aside from the fact that many have proven to be naive of bureaucracy in governmental administration or governance as a whole is that we are really divided as a people.

Though, I may be wrong, but, i doubt if we have ever being this divided as a people. The fear is real and each part of the country hold some level of suspicion against each other, yet, the government, rather than make meaningful attempts to allay the fear and to also weld the country together have succeeded in increasing the tempo of the suspicion.

Firstly, it need be noted that the office of the Chief of Staff was created by Chief Olusegun Obasanjo during his tenure as the President of the country and, at no point in time was the office made constitutional. The post is appointive and the Chief of Staff is more or less a domestic staff of the President though, he is on the payroll of the Federal Government (if I'm not mistaken) and he can be otherwise referred to as Principal Secretary to the President. This, became evident when Umaru Yar'adua as the President of the country changed the nomenclature to 'principal secretary' rather than CoS. The duty of the CoS involve acting as a bookmaker or scheduled officer for the President by overseeing his appointments and meetings. Therefore, he can be otherwise referred to as the Confidential Secretary to the President the same way the Yorubas would refer to Esu as the confidential secretary to Olodumare.

It must not be forgotten that during his reign as the President of the country in 1999, Obasanjo directed the then Secretary to the Government of the Federation, Chief Ufot Ekaette to draw for his approval the schedule of the office of the CoS which include;

2- Conveyance of all directives and decisions of the President to the Secretary to the Government of the Federation, Chief of Defence Staff, members and other top functionaries of Government

4- Chairing of meetings of Principal Staff Officers to the President

7- Arrangement of all official appointments and engagements of the President, in conjunction with SCOP and ADC to the President

11-Coordination and attendance of the annual council/boards of Defence, NA, NN, NAF, NWC, CSC, NDA and NPF as well as following up all decisions reached at the meetings

14- Management of correspondence to and from the President including the circulation of enrolled legislation, proposed Executive orders, decision memoranda, speeches and other Presidential documents to relevant State House functionaries for clearance and comment

15- Ensuring that any document being forwarded to the President is in suitable condition, technically and substantively for President review and action

16—maintenance and control of the President's projects and welfare accounts

17—authorisation of use of Presidential Air-fleet by Government functionaries.

However, the growth of the power and influence accorded to the office lies on the President, because, as the most powerful person in the country, he is the only person that can decide how relevant and powerful the CoS could be as all powers flow directly from him. As rightly stated by Dr. Doyin Okupe in his piece 'MINISTERS REPORTING TO ABBA KYARI', one would be forced to succumb to his point that "... the President needed not to have announced it publicly.", but, one thing that we cannot take away from his declaration is that it is possible that many have violated the privilege accorded to them during his first year in office which has rendered the office of the CoS useless and insignificant and he is of the opinion that something need be done as a matter of necessity and alacrity so as to avoid such embarrassing moments.

While debating this sudden governmental reform of Buhari, we must not forget to charge him that we expect utmost service delivery in all aspect of governance while nurturing the country's budding democracy.