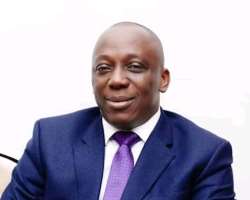 The Attorney-General and Commissioner for Justice, Delta state, Barr. Peter Mrakpor, has received the acceptance of members of the Law Officers Association of Nigeria (LOAN), in a resounding vote of confidence passed on him for his innovative leadership style and for being an apostle of the rule of law.

The vote of confidence was passed on the Attorney-General at the 3rd quarterly meeting of the State Chapter of the Law Officers Association of Nigeria presided over by the State Chairman of the Association, Mr. Thomas Anigara.

The 3rd quarterly meeting of the Association, an umbrella body of all State Counsel practicing in the State was held on Wednesday, August 21, 2019 at the Asaba, the State Capital.

Mr. Peter Mrakpor was described as an astute, dogged and visionary leader whose strides in the Ministry of Justice was unprecedented. The motion for the vote of confidence which received overwhelming “yea” from all members was moved by Mr. Patrick Okoh.

In an interview, the Chairman of the Delta LOAN, Mr. Thomas Anigara said that the vote of confidence on the Attorney-General was long over-due as the Ministry had never had it so good since the AG has been in the saddle.

They thanked the State Governor, Senator Dr. Ifeanyi Okowa for appointing a humble, hardworking and a well experienced Lawyer as the AG and expressed satisfaction with his style of leadership.

While urging the Justice Commissioner not to relent in his oars in the area of reforms and quality legal advice he has rendered to Ministries, Departments and Agencies of Government and his total respect for the rule of law, the LOAN chairman expressed optimism that the Delta AG has already stamped his indelible imprints in the sands of time.

Anigara who stated that the Delta AG as the official Leader of the bar in the State has not failed members of the noble profession, listed some of his achievements to include provision of working tools for all lawyers inclusive of electronic libraries, approval for sponsorship of all State Counsel to the 2019 NBA conference holding in Lagos, payment of claims, restructuring of the Ministry that saw to the creation of the Public Advisory Unit to render free legal advice to indigent and vulnerable persons as well as the creation of the sexual Offences/Domestic Violence Unit to handle the menace of sexual offence and domestic violence.

He said that the approval for the sponsorship of all lawyers in the Ministry to attend this year’s NBA conference was the first in the annals of the Ministry’s history and urged the Commissioner to sustain his giant development efforts.