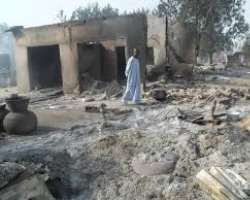 At least two Local Government Areas of Borno State in the northern part of the state, Gubio and Magumeri LGAs are feared to be invaded and presently occupied by the Boko Haram terrorists Wednesday night when the insurgents in their large number surprisingly invaded simultaneously the two LGAs and launched coordinated attacks on the areas despite the presence of military formations in the areas which started Wednesday evening through Thursday morning without military counter fight or confrontation accordingly residents and local vigilante groups sources.

Our Correspondent gathered that hundreds of thousands of residents have been displaced since Wednesday evening into the bushes and nearby communiities while other thousands of residents or locals are said to be under the captivity of Boko haram insurgents in Gubio and Maguneri towns which serve as the LGC Headquarters of the two LGAs at a distance of 30 km and 80 km respectively from Maiduguri city.

It was gathered that in Gubio, the Boko haram insurgents on Wednesday evening invaded Gubio LGC Headquarters, Gubio township shooting sporadically and shouting Allahu Akbar, meaning God is Great scaring people and creating tension and confusion among the residents which led to killing of scores of residents while others sustained various degree of injuries as some houses and other buildings were ransacked and set ablaze by the BHTs.

Speaking on the incident and confirming the invasion and attack by the BHTs in Gubio town on phone Wednesday night with newsmen, the Caretaker Chairman of Gubio, LGC , Hon Zanna Modu Gubio said, "the insurgents stormed Gubio town at about 6pm, performed their Magrib prayer at about 6:30 pm with the residents of Gubio town freely and comfortably."

"Llater after the Magrib prayer, the Boko haram Terrorists instantly started to wreck havoc on the innocent residents who were peacefully going about their normal businesses and managing their life quietly, observing their daily petty businesses while others were going to farm.

"Then people started hearing gunshots sporadically from everywhere as if they circled the town and positioned themselves in strategic positions within the town and continues to wreck havoc in the people causing confusion and raising tension as they also started setting houses and public structures ablaze", Zanna said.

The Caretaker Chairman who spoke to newsmen in Maiduguri during the attack said, "It is unfortunate that this is coming again just after a week when the same BHTs attempted to invade Gubio town but we're repelled by the military troops of the Gubio battalion command last Saturday night for almost 7 hours period of exchange of gunfire between the BHTs and soldiers on Eid Kabir eve .

"This was also a deadly attack which took place in Gubio town that led to the withdrawal of the troops in the area.

" Now just look at it again that another set of armed Boko haram group stormed Gubio town Wednesday evening at about 6 pm, performed their Magrib prayer at about 6:30 pm together with the residents in the Gubio Central Mosque before wrecking havoc on the innocent civilians and also setting houses and other public buildings on fire, burning places.

" I am presently in Maiduguri for the swearing in Ceremony of the newly appointed State Commissioners and all of a sudden, I started receiving distress calls that my people are under dre Boko Haram attack.

"Although, I cannot give you the actual number of casualties for now, but from all indications and the reports I have so far, the Boko haram insurgents have taken over Gubio town. It is said that they were just shooting at sight and burning houses and other buildings without any confrontation from security operatives or CJTF and vigilante hunters," Zanna said.

Similarly, it was reported in Magumeri town of Maguneri LGA of Borno State which is located at about 50 km between Gubio and Maguneri towns that another set of the Boko haram insurgents attacked Maguneri town.

The BHTs were said to have invaded Maguneri same Wednesday evening and seem to have succeeded in razing down the Maguneri LGC Secretariat, some public buildings and houses including that of the Member of House of Representatives of Gubio, Magumeri and Kaga Federal Constituency, Hon. Usman Zannah,a former State Commissioner in the past adminstration of former Governor kashim Shhettima.

Speaking to newsmen on phone Thursday Morning, Hon. Zannah confirmed the BHTs attacks in his federal constituency and said, "Two Local Government Areas of Gubio and Magumeri where I hail from have been overran by the Boko Haram.

" As I speak with you now, all good houses in Gubio and Magumeri towns have been set ablaze including my House and the Council Secretariat. My people have been displaced, and there is nothing we can do than to bring survivors into Maiduguri.

"It is unfortunate that the insurgents took advantage of troops withdrawal from the affected areas and wrecked havoc without confrontation."

Meanwhile, efforts to get the Executive Chairman of SEMA, Hajiya Yabawa Kolo on phone to confirm casualties and plans the state government has for the emergencies in Gubio and Maguneri towns which may be inaccessible and whether the agency has started recording IDPs from the two LGAs this morning Thursday.

With th challenges on ground, it is not going to be easy for the emergency agencies and donors partners to handle the large number of displaced people Gubio and Maguneri LGAs in Maiduguri the state capital which has been the safe haven of IDPs displaced from over 20 LGAs of the state since 2014 to date while both federal and state governments are pursuing reconstruction, rehabilitation and resettlement processes of the millions of IDPs across the state under their post Insurgency peace building agenda.