…Says The Condemnable Assault On Ekweremadu Is Ethno-Politicized
By Intersociety 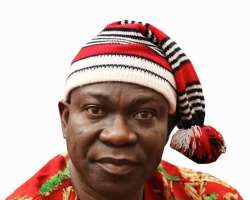 Onitsha, Eastern Nigeria: Monday, 19th August 2019: The identities and confessional statements of the alleged abductors and killers of the two Enugu based Priests of the Catholic Church as well as the abduction of the Traditional Ruler of Obom-Agbaogwugwu, HRH Sunday Orji and his wife, among other violent crimes ravaging the State in recent months are circumstantially fallacious and remain questionable. It is also deeply sad and disturbing that the recent assault on Senator Ike Ekweremadu in Germany, as condemnable as it is, is now taking ethno-political dimension and blown out of media proportion; all aimed at further stigmatization, criminalization, demonization and terrorization of the Igbo People including portraying them as a ‘rogue ethnic nationality in Nigeria’.

The above was the position of Int’l Society for Civil Liberties & Rule of Law, Intersociety, as contained in a statement issued today, 19thAugust 2019 and signed by Lawyers Obianuju Joy Igboeli, Head of Civil Liberties & Rule of Law, Evangeline Chidinma Udegbunam, Head of Campaign & Publicity Dept and Emeka Umeagbalasi, a Criminologist & Graduate of Security Studies and Board Chair of Intersociety. Intersociety is led by professionals and grassroots activists including criminologists, security studies experts, lawyers, journalists and peace and conflict resolution experts, etc.

Oha-Na-Eze’s Unsound Position On Killings & Abductions In Enugu & Igbo Land: The recent public statement credited to respected President of Oha-Na-Eze Igbo, Elder Nnia Nwodo, a senior lawyer, blaming Igbo youths for cashing in on ‘Fulani Herdsmen rampage in Igbo Land’ to abduct for ransom, rob and kill their fellow Igbo citizens especially the Priests of the Catholic Church, etc; is not only legally and circumstantially unsound but also capable of emboldening the real perpetrators and escalating the referenced violent crimes which are systematically organized and targeted; with ethno-religious and economic coloration.

Intersociety is alarmed and shocked by such generalized and ‘industrial scale’ transfer of criminal responsibilities. It may be socially disastrous if such magisterial assertion lacking in empiricism is not formidably refuted. Our respect for the age and person of Barr Nnia Nwodo remains intact, but we respectably disagree with his position on this subject matter. This is more so when the respected Oha-Na-Eze chief merely relied on the recent questionable public parade and disclosure by the Enugu State Police Commissioner, Mr. Suleiman Balarabe, of the alleged killers of the two Enugu based Priests of the Catholic Church as well as abductors of the Traditional Ruler of Obom-Agbogwugwu in Awgu Local Government Area of the State. To establish the veracity of CP Suileman Balarabe’s claims, such must be independently and expertly verified including hearing from the suspects, their lawyers and families including wives.

The Enugu CP, an officer of Fulani-Hausa Muslim extraction, had on Friday, 17th August 2019, paraded ‘two suspected killers of Rev Father Paul Offu and 30 other suspects’ accused of being responsible for killing in March, of Rev Father Clement Ugwu as well as abduction of the Traditional Ruler of Obom-Agbaogwugwu, HRH, Sunday Orji and his wife; among other victims of violent crimes ravaging Enugu State in recent months or times. Rev Father Clement Ugwu was abducted and killed on 14th March 2019. On his part, Rev Father Paul Offu was abducted and killed on 1st August 2019.

As if that was not enough, another Catholic Rev Father, Father Chimezie Ani of the same Enugu Catholic Church or Diocese had few days ago, raised the alarm on how he narrowly escaped being abducted by suspected Jihadist Fulani Herdsmen; usually referred by police authorities and censored media as “unknown gunmen”. The Traditional Ruler of Obom-Agbaogwugwu, HRH, Sunday Orji and his wife were abducted on 3rd August 2019. Also a former Commissioner for Information in Abia State, Barr Chikamnayo Eze had his car riddled with bullets by suspected Jihadist Fulani Herdsmen on 4thAugust 2019. He narrowly escaped being abducted on the said date along Isuochi-Enugu Road, near UNTH in Awgu Local Government Area of Enugu State.

Jihadist Herdsmen Colored Patterns & Trends Of Killings & Abductions In Enugu & Igbo Land: in all the cases of recent abductions and killings particularly the abduction and killing of the Priests of the Catholic Church in Enugu State, their patterns and trends are indigenously strange and inter-religiously colored. While perpetrators of ‘indigenous (i.e. Igbonized abductions and killings tailored in non state actor criminal enrichment) abductions and targeted killings’ are urban city based with minutest or no attention on members of the clergy as their main targets, the patterns and trends involving the cited cases in Enugu are ‘bush based’ (i.e. attributes of Fulani Daji jihadists/criminals) with members of the mainstream faith entities (i.e. Priests of the Catholic Church) as their targets. In other words, they are ‘religo-economic’ in nature.

Evidentially, the abduction and killing of Fathers Ugwu and Offu; the abduction of HRH, Sunday Orji, his wife and former Abia Commissioner, Barr Eze Chikamnayo and attempted abduction of Rev Father Azubuike Ani were majorly, if not all carried out in isolated areas or forest/bush sides in the bushy parts of Enugu State; violently and criminally accessed by members of the Jihadist Fulani Daji population, forcefully populated in different forests, bushes and farmlands in Igbo Land using public funds of the Government of Nigeria and its security forces.

Transfer Of Criminal Responsibilities & Unreliability Of Confessional Statements: The Oha-Na-Eze chief’s position is further dealt a heavy blow by failed police investigative intelligence and heavy reliance on the use of transfer of criminal responsibilities in Nigeria. For purposes of ethno-religious and political undertones as well as criminal enrichment, most of the suspects being publicly paraded by the Police; accused of involvement in domestic violent crimes; usually end up being falsely accused, wrongly arraigned and prosecuted. In some cases, they end up being convicted and jailed for crimes they never committed. In other cases, they stand in for the real perpetrators and get punished in their stead. Yet in other cases, charges preferred against them by the State collapse at trial for want of concrete trial evidence.

This is more so when the same Commissioner of Police has never publicly admitted the atrocities of the Jihadist Fulani Herdsmen in Enugu State. He is also one of the senior police officers in Nigeria that have continuously labeled culpable Fulani jihadists/domestic crimes’ perpetrators as “unknown gunmen” or “armed robbers” or “kidnappers”; even when available circumstantial evidences clearly indicate the contrary. From independent information available to us so far, the suspects’ confessional statements are riddled with inconsistencies. Specifically, the identities of the suspected killers of the two Rev Fathers and abduction of the Traditional Ruler, etc, also need to be professionally revisited or re-examined.

The Condemnable Assault On Senator Ekweremadu Is Ethno-Politicized: The assault on Senator Ike Ekweremadu, though condemned in strongest terms, is scornfully ethno-politicized. Intersociety has never taken sides and will never take sides with violence and its perpetrators, be they state actors or non-state actors in Nigeria or beyond its borders. Jungle justice of any form is roundly condemned.

However, the reasons for such assault by members of the Igbo Community in Germany are grounded and solidly justifiable, yet the response approach is very condemnable. It must be pointed out too that the degree of anger shown in the incident is a criminal misdemeanor (i.e. common assault) and not a felony. On conviction, it attracts only one to three years sentence. This is just to put the records straight and not to justify the assault on the first class Igbo Senator. The explanation is also to diminish the rapacious criminalization and escalation of same in the country’s deeply divided and ethnicized mainstream media. It must be pointed out further that elements of wounding or assault occasioning bodily harm or aggravated assault or assassination attempt or attempted murder are all ruled out in the referenced assault.

Reasons For The Assault Justifiable But Response Approach Wrong: It is wrong for IPOB to say that Igbo Govs and other key Igbo political players proscribed the group as they lack such national codified powers and laws to do so. But it is likely more correct to accuse them of conspiracy in the vindictive proscription. That is to say that the reactions trailing the assault on Senator Ike Ekweremadu are welcome, yet, we are deeply worried over the silence or absence of such widespread reactions such as in the wake of well coordinated atrocities against the Igbo Nation and her People.

For instance, the media and key Igbo political actors, except few, had become silence and speechless when over 480 unarmed, defenseless and nonviolent citizens of the old Eastern Nigeria were massacred between August 2015 and Sept 2017. The same goes with rapacious militarization of Igbo Land and domination by 95% of all military, security and policing establishments in the Region and others by senior security officers of Northern Muslim background as well as unchecked official highway and roadway robberies on Eastern Roads. Such silence is further maintained in the ongoing ‘Fulanization and Islmaization’ of Igbo Land including her forests, bushes and farmlands. In as much as we welcome the wide reactions condemning the assault on Senator Ike Ekweremadu, but such reactions are acutely selective and cowardice; disappearing when they are needed most.

The Assault On Senator Ekweremadu Must Be Stopped From Being Ethno-Politicized: It is a fact that the Igbo People had lived and still live in Nigeria with entrenched cultural violence against them; whereby only negative stories concerning the Nationality are given premium attentions or spaces in the country’s Southwest controlled mainstream media while positive stories about the Nationality and those concerning ‘medium’ and ‘industrial scale’ crimes against them are brutally relegated. For instance, Intersocietyhad severally encountered such particularly during its researches and publications over the military massacre of hundreds of unarmed and defenseless citizens as well as the militarization of the Southeast Roads and associated official highway and roadway robberies by soldiers and personnel of the Nigeria Police and the Navy.

A clear case in point (ethno-politicization of assault on Senator Ekweremadu) was the latest report of Premium Times on Mr. Kanu’s broadcast following the assault. The named media outfit, went far in the ethno-politicization under complaint, by describing the international radio station (Radio Biafra Int’l) properly licensed by the UK Government as “rogue radio station”. Despite being professionally aware of what would have befallen Mr. Kanu and members of his royal family if they had not escaped from the obvious military massacre and assassination mission to their Afara-Ukwu Royal Palace on 13th and 14th Sept 2017; forcing them to flee the country alive; the respected Southwest media outfit went further to describe Mr. Kanu as “fugitive who jumped bail and escaped the country where he was standing trial for treason”.

Such ‘tribally hateful media reports’ by a supposedly civilized and democracy and human rights friendly media outfit also has the capacity of emboldening the murderous Nigerian Army and others into launching another round of massacre operations in Eastern Nigeria solely targeting hundreds of defenseless Igbo population using criminalization, stigmatization, demonization and terrorization as well as prosecutorial vindictiveness. This, if allowed, could further lead to death of hundreds and maiming of others, possibly in double, as well as further disruption of economic or commercial activities in Eastern Nigeria.

Terror Tag On IPOB Is Mala Prohibita Only Within The Borders Of Nigeria: The authorities of the Premium Times and others must also be clearly informed that the terror tag on IPOB is only mala prohibita within the boundaries of Nigeria particularly as far as the Buhari-Osinbajo Government still exists. Beyond the borders of the country, the terror tag is null and void and of no effect whatsoever; as it is neither mala prohibita nor mala inse beyond the borders of the country. In other words, it is a clear case of a jungle-country where a terrorist is defined by yearning and voice-coughing! Nigerian media of whatever divide must refrain from glorifying such illegalities.