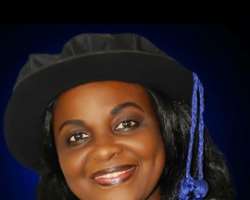 Presidential candidate of the Mass Action Joint Alliance (MAJA) Princess Prof. Funmilayo Adesanya-Davies speaking on Thursday 18th July, 2019, in Port Harcourt, has commended the effort of President Donald Trump in the US while she condemns what she calls practices of 'Fulanicrazy' and 'Fulanicracy' rather than democracy in Nigeria by the APC Buhari-led government.

Adesanya-Davies said President Donald Trump has done well, and kudos to him, as "history was made on Wednesday, July 17th, in Washington when dozens of victims of religious persecution from around the world, including Nigeria met inside the White House with the US President, the most powerful man in the world. It was the first time in recent memory that a sitting President of the United States or any country for that matter would grant victims of religious persecution such unfettered access to power." Prof. Fumilayo Adesanya-Davies
"These victims of religious persecution were invited, along with thousands of others, to take part in the Trump administration's initiative to protect and promote religious freedom, which was an extraordinary and moving scene in the Oval Office as President Trump took time to listen to the stories of these persecuted people from all over the world, who shared the touching stories of how they have been targeted in their respective countries for their faith."

"There were about 27 people from 16 countries who clustered around the president at his desk, many of them shaking hands with him, one of them, says: “Thank you, Mr. President, for the opportunity to see you,” “I am Esther from Nigeria, I do three years in Sambisa. I escape from Boko Haram.”

As the stories and testimonies went on, Donald Trump insisted he had time to hear more of their stories.

A woman from Iran shared her family’s experience:

“My parents are pastors,” she said. “They’re Christian pastors. They’ve been arrested – all my family – my father, my mother, my brother. They are free on bail, awaiting the trial and long sentences.”

Pastor Paula White attested, "I was in the room yesterday with thousands and we had thousands that could not get in," referring to the administration’s multi-day Ministerial on International Religious Freedom. “So we thank you President for being the leader, the courageous leader, to stand up not only in our nation but countries all around, for all faith of all people that we should have the practice and the right to practice our religion.”

“All people from every place on the globe must be permitted to practice their faith openly, in their homes, in their places of worship, in the public square and believe what they want to,” said Secretary of State Mike Pompeo, addressing the Ministerial Tuesday. Mike

Pompeo spoke at the event again on Thursday along with Vice President Mike Pence, another outspoken advocate for religious freedom.

"The State Department says 80 percent of people worldwide live in a religiously restricted environment ...." Signing off from the historic meeting in an official video from the White House, President Trump promised to do whatever it takes to expedite interventions in the troubled regions."

Bishop Davies says, "those states in Nigeria, who voted for Buhari and the APC government in 2019 election, have themselves to blame in the implementation of Islamisation agenda as the Holy Bible says, "To whom you yielded yourself to as master you shall serve."

Now, they are complaining about mass killings by Boko haram, Muslim assailants, Fulani herdsmen and bandits, RUGA, OIC and all sorts, after seeing the hand writing on the wall and voting for it. "It's just the beginning I would say, as they have four more irreversible years of distress and sorrow to go." she added.

Adesanya-Davies waillingly condemns what she terms as practices of "Fulanicrazy" and "Fulaniracy" in place of democracy in Nigeria by the APC GOVERNMENT. Remember, the only Dapchi Christian girl, Leah Sharibu is still in captivity. "I hope Nigerians both at home and in diaspora would be able to reverse this one day, and it will not be long."