EFCC to arraign woman for collecting N22.9bn from Dasuki 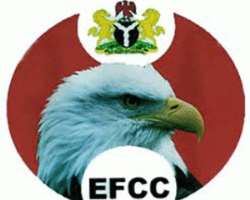 The Economic and Financial Crimes Commission will on Monday (today) arraign one Mrs Isabella Oshodin and Bob Oshodin Organisation Ltd at the Federal High Court sitting in Abuja for N22.9bn fraud and money laundering.

The commission disclosed that they would be arraigned before Justice Taiwo Taiwo on 25 counts for receiving the money fraudulently from the former National Security Adviser, Col. Sambo Dasuki (retd.).

According to a statement in Abuja on Sunday by the acting EFCC spokesman, Tony Orilade, Oshodin and her firm allegedly received $57.3m and N2.3bn from Dasuki.

EFCC investigations revealed that the defendants also on eight occasions received $57.2m in escrow accounts of Bob Oshodin Organisation Ltd, in contravention of Section 15 (2) (b) of the Money Laundering (Provision) Act, 2011 as amended in 2012.

Count two of the 25 counts read, “That you, Mrs Isabela Mimie Oshodin, Bob Oshodin Organisation Ltd and Mr Robert Oshodin (still at large) on or about June 22, 2014, in Abuja within the jurisdiction of this honourable court directly transferred the sum of $7, 712, 598 to one Portfolio Escrow Company with account number 3102004330 domiciled in California Republic Bank, United States of America which sum you reasonably ought to have known to be proceed of an unlawful act of Sambo Dasuki, the then National Security Adviser to wit: criminal breach of trust and you thereby committed an offence contrary to Section 15 (2) (b) of the Money Laundering (Provision) Act, 2011 as amended in 2012 and punishable under Section 15(3) of the same Act.”