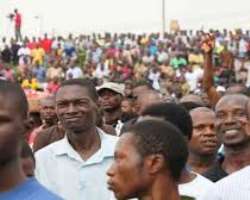 The baboon does not issue an ultimatum to the leopard, pepper is small but its fight is much bigger.

My young friend, Rekwi Sunday Musa ruminating some weeks back had stated his puzzle, he asked, when did being young become synonymous to being stupid? In local parlance he asked, 'dem do us or we simply enjoy stupidity?

Even youths in the villages aren't left out; these evil blood sucking old men go into their meetings and fight bloodless battles without exchanging anything beyond harsh words (not even a slap), and they come back into the village square and feed gullible agile young men and girls lies about boundary, ethnic superiority, politics etc and we thoughtlessly move like pawns in a chess game and start killing ourselves on problems we didn't cause and tribes we didn't choose to belong to.

This nonsense must stop O, really.
These elders should be careful, crisis entrepreneurs peddling war for financial gains and political relevance, your nemesis is around the corner.

My fellow youths, please turn a new leaf, say no to bigotry, resist these elders and seek wisdom, let the elders go and fight in the field. Whether you're in town or in the village, we are not useless, we are only used-less; at least even a dead clock shows time correctly twice a day. STAY ALIVE, STAY USEFUL.

As I read the young man, I smiled knowing, but sadly my take is as one door sharply bangs shut in Benue state, another opens in Plateau. One opens in Zamfara state, another window in Sokoto, whether is Katsina or its Ogun or Abia. That is the nature of our struggles. In 1859, Friedrich Engels wrote, ‘History often proceeds by jumps and zig-zags’. To imagine history as a linear line that moves in a progressive direction is bewilderingly incorrect. It is romantic to believe either that history is conservatively circular – so that change is fundamentally impossible – or that history is progressively linear – so that everything improves in a scientific manner. Neither is plausible.

Human history is a struggle between the imagination for a better life and the constraints of the present. Some of these constraints are material, and some are social. Inadequate material conditions and the rigidities of class can hold and does back human progress, whether in Kano, or in Lagos, it is the same and the culprit, victim, and loser is that young person who is used-less, not exactly useless.

There's the youth who is the modern day revolutionist, he is upset at everything, full of grammar, tells you tales by the moonlight of the 'not-too-young-to-rule' yet give him a ruler the measurements in centimeters and meters all confuses the lad. We have the Indian-smoking, drug abusing, snipper hearted young men and women littered all over our landscape, from Owerri to Daura, Jalingo to Ado-Ekiti.

The nation is blessed in their thousands with all kinds of baked youths, unemployed but unemployable, unbaked, half and quarter baked. Magazine life styled young persons, the Davido 30billion in their account and Naira Marley crew of Yahoo-Yahoo boys..

The Social media lot, whose lives are on Twitter and Instagram, while their real lives are messed up by a political bourgeois class that continues to perpetuate their own dynasty, sharing the country as it were; a personal estate. In case you do not understand my drift on the Used-less youth, this is it; Youth in Nigeria includes citizens of the Federal Republic of Nigeria aged 18-29 years. Variances in chronologies are used in defining youth and are addressed by members of the state in accordance to their particular society. Nigeria is the most populous country in Africa with one of the largest populations of youth in the world, comprising 33,652,424 members. Excessive mortality from HIV/AIDS results in low life expectancy in Nigeria. As a result, the median age is 17.9.

In former President Obasanjo's words, "Youth constitute Nigeria's only hope for a real future". The Nigerian government characterizes youth as ambitious, enthusiastic, energetic and promising. They are considered vulnerable in society because of the rapid pace of change they experience at this time in their lives." Sadly the future is blurry, the Used-less youth is on the edge.

We have a National Youth Development Policy created and designed to advocate for youth and youth development. The policy was to view youth welfare as vital to the Nigerian nation and its socioeconomic development. This policy was seen as a youth participation project, versus a project identifying problems and needs. But till date it is a mirage, a false shadow of reality where 70-year-old men masquerade as leaders of youth wings of socio-political groups.

The National Youth Council of Nigeria (NYCN) was founded in 1964 to be the voice and the umbrella organization for youth organizations in the country. The Youth Council is non‐governmental, non‐partisan, and not‐for‐profit organization, but like NYCN like the National Students body NANS, they continually toy with a population of 200,962,417 with the direct consent and participation of old political yahoo-yahoo discussants at the national dialogue of the Nigerian state.

While the system continues to battle in holding itself, our youths are products of a corrupt educational ecosystem; sons and daughters of the same (magicians and politicians) continue to toy with the future, while our youths are lost in the conversation or at best made redundant participants.

We will remain here because our leaders are politicians, bazaar experts at sharing and auctioning out the national heritage and treasury. The social contract is at best dilapidated and at worst do not exist, our leaders are sacrificing the present for the future, sacrificing the young generation for the numbers. The youths are a term used as headcounts, for political gains, as tools, and conflict drivers. Leadership is a choice it is not a rank, our youths need to stand and be counted, they need to start posing the right questions or else the answers would be as expected. How long will this generation stay on the rough path, at what point do we wait to see a population that is useful in wholesome proportion than scattered showers, or are we doomed to the current state where they are used-less, when will the youth realize that the fight in them is much bigger, and issue a nation changing ultimatum—Only time will tell