The Attack By Ipob On Sen. Ike Ekweremadu In Germany 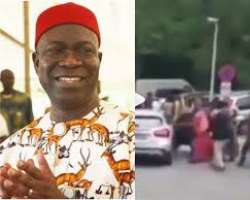 (August 17, 2019) The attack, today, August 17, 2019, in far away Germany, on former Deputy Senate President of the Federal Republic of Nigeria, Distinguished Sen. Ike Ekweremadu, CFR, and his entourage, by members of the Indigenous Peoples of Biafra (IPoB) is indeed lamentable and condemnable in all ramifications.

Ohanaeze Ndigbo, Enugu State, condemns, in the strongest terms possible, this shameful show of rascality and infantile miscarriage of aggression by IPoB. That this unwarranted act of aggression could be orchestrated by the misguided members of IPoB in Europe is indeed ridiculous.

One would have thought that having come in contact with higher civilization the IPoB members in Germany would have embraced a more decent way to register their grievances.

For the avoidance of doubt, we are aware that IPoB has been agitating for an independent State of Biafra but unfortunately they see all Igbo persons who believe that the Igbo agenda in Nigeria could be achieved by other means, especially through restructuring of the country, as enemies of the Igbo nation and must be eliminated. Ohanaeze Ndigbo Worldwide has tried severally to call IPoB to order to no avail.

The position of Ohanaeze Ndigbo, Worldwide is very clear on what the Igbo want in Nigeria. We want a restructured Nigeria, where the Igbo would have a greater control over their own affairs. We want a return to the 1963 Republican Constitution, which defined the boundaries of engagement between the various regions in Nigeria. We demand genuine fiscal federalism and proper devolution of power.

Igbo leaders, having examined all options available in achieving the foregoing have come to the conclusion that our best bet is restructuring of the country. The Southwest, South-South and Middle Belt Regions have bought into this option and currently there is a groundswell demand to restructure Nigeria.

Sen. Ike Ekweremadu is a patriotic Igbo leader who has at all times lent his weight to this option and was a very strong voice during the Ekwueme Square, Awka Declaration of Igbo position in Nigeria in 2016. Typical of its abrasive and vitriolic approach, IPoB has resorted to name-calling, threats, blackmail and dirty propaganda against Igbo leaders who canvass the foregoing demands.

Ohanaeze leadership has not been spared in this barrage of misguided attacks from IPoB. Despite IPoB’s caustic and uncouth method, Sen. Ekweremadu played a major role in the release of its incarcerated leaders.

We are, therefore, appalled by this attack on the Distinguished Senator and his entourage in Germany and wish to warn that Ohanaeze Ndigbo, Enugu State will no longer tolerate this crass rascality.

We demand that the leadership of IPoB should call its members to order and tender an unreserved public apology for this affront on the revered Senator.

We have no doubt that the security agencies in Germany will identify these hoodlums and bring them to justice. Enough is enough!!!