Ebonyi State: Ruga As A Weapon Of Political Revenge. 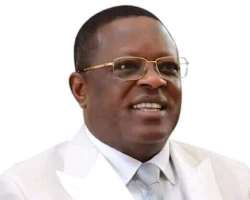 In human history, the battle for freedom has never been [and can never be] won summarily in any given society. The dynamics of human psychology and socio-political interactions keep generating real and imaginary encumbrances to human freedom which elicit resistance from those whose freedom are either encumbered or threatened. This is true even in the present Ebonyi State. Created in 1996 after a tortuous 39-year struggle, a section of Ebonyi political elites constituted themselves into a hegemonic cult with the objective of converting the young state into their private colony where the will of the people would not count! Ebonyi masses who were tired of slavery staged a political revolution through the ballot box in 2015 and succeeded. For the first time, the people of Ebonyi State elected a governor in the person of Engr. David Nweze Umahi, a set of nine National Assembly members and another set of 24 state legislators who they could truly call their leaders. Thence, Engr. David Umahi became the symbol of freedom and democracy in Ebonyi State. This feat and the social contract which flowed from it resulted in the explosive positive transformation of Ebonyi State on all fronts. While Ebonyi masses celebrated their freedom and the bounteous yields of their electoral investment in the David Umahi political brand, the defeated Ebonyi hegemonists and their disgruntled allies went to work in their bid to prevent the new democratic culture from taking firm roots. These enemies of the common good founded and funded a well-oiled blackmail industry which duty was to create tension and disaffection in Ebonyi State by serially manufacturing lies and peddling unfounded rumours against the governor and the government of Ebonyi State. However, when the focus and commitment of both the Divine Mandate administration of Engr. David Nweze Umahi and the people of Ebonyi State could not be swayed from the duties of their social contract, the blackmail industry folded.

In the build-up to the 2019 general elections, these beneficiaries of the old order ran a campaign of calumny filled with fury but devoid of meaning. As people out of synchrony with the masses of Ebonyi State, they condemned all the signature projects and programmes of Umahi like the roads on rigid pavement, the overhead bridges, Ebonyi shopping mall, Ebonyi ecumenical centre, Ebonyi pulverization plant, the unprecedented empowerment of Ebonyi men, women and youths and Ebonyi Neighbourhood Security Watch which Ebonyi people and the world have continued to celebrate. The sensitive and all-important Abakaliki ring road project which had potentials to catalyze economic development was also attacked by these enemies of progress whose ambition was to recolonize Ebonyi State. Even the principles of equity and justice which guided the rotation of Ebonyi State governorship position among the senatorial districts were not spared the attacks by these unpatriotic elements who subjected everything to political expediency. In the face of all these distractions, Governor Umahi and Ebonyi people remained mutually focused on good governance and the need to strengthen the freedom of Ebonyi people to choose their leaders without encumbrances. When the results of the 2019 general elections were published, the preference of Engr. David Umahi and his team to other fringe politicians by Ebonyi people was manifest and more pronounced from the voting points to the final collation centres! The election petitions of the opposition were all stillborn because they were founded on nothing and so could not pass any legal test. Frustrated, these unforgiving agents of darkness disappeared into their covens and waited for any opportunity to vent their spleen on Ebonyi people whose only sin was that they insisted on their right to freely elect their leaders beginning from the 2015 general elections!

The RUGA settlement controversy which came to the front burner of Nigerian political discussions after the 2019 general elections provided the enemies of Ebonyi State the opportunity to hit back at Governor Umahi. They dusted their moribund instrument of blackmail and began serial distortion of verifiable facts to create confusion by insisting that Umahi has secretly donated land in Izzi and Igbeagu for Ruga settlement! This allegation is infantile and laughable considering the antecedents of Engr. David Umahi as a leader with great political will who has always pursued his convictions and policies openly. Umahi, in his capacity as the Chairman of Southeast Governors' Forum, presided over the meeting of the forum in Enugu where members of the forum made it clear that there was no land in the southeast for Ruga. Rather, the governors of the southeast offered to grow and sell grasses or fodder to our northern brothers. It was Governor David Umahi that read that resolution to the world. In a similar vein, the NEC committee on Farmers/Herders crises under the chairmanship of Vice President Yemi Osibanjo in a communique issued after a meeting at the Presidential villa on 3rd July, 2019 acknowledged the suspension of the Ruga programme by the presidency for its inconsistency with the National Livestock Transformational Plan, NLTP. The communique approved the National Livestock Transformational Plan and made it clear that it was voluntary for the 36 states of the federaion; and that any state that is interested in NLTP "is required to bring development plan in line with NLTP for implementation in his State which will be unique to the State based on the challenges of the State".

From the foregoing, it is pertinent to note that Ruga was rejected by both the Southeast Governors' Forum under the chairmanship of Engr. David Umahi as well as the people and Government of Ebonyi State where Engr. David Umahi serves as Governor. Ruga settlement programme was suspended by the presidency. Suffice it to say that both Ruga and the National Livestock Transformational Plan are open policies which are not susceptible to secret or confidential implementation. Governor Umahi and in fact any other governor cannot donate such expanse of land as demanded by the Ruga programme secretly without the knowledge of the commissioner, permanent secretary and staff of the Ministry of Lands and Survey; or orally and without proper documentation! I say this because given the unanimity with which the Ruga settlement programme was heartily rejected by Ebonyi citizenry, some staff of the said ministry would have, as a matter of righteous indignation, leaked the allocation documents in the social media for the world to see. Secondly, devising such expanse of arable land as demanded by the Ruga programme would be antithetical to the succeeding Agricultural revolution programme in Ebonyi State for which the world and the Federal Government have continued to celebrate Umahi. Having said this, I challenge anybody who is peddling this wicked and baseless rumour to show Ebonyi people any proof thereto or keep quiet. Ebonyi people of good will are hereby enjoined to ingnore the antics of those whose intention is to scuttle the true freedom that Ebonyi people won for themselves since 2015; and continue to support the Divine Mandate administration of Governor Umahi which has yielded Ebonyi State and her people monumental evidences of good governance.