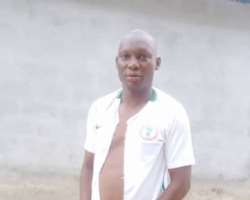 Chairman, Committee for the Defence of Human Rights (CDHR), Prince Kehinde Taiga, has alleged that one Assistant Superintendent of Police (ASP), Isaac Akpene, from Ebrumede Division has threatened to eliminate him.

Prince Taiga, also purported that a failed attempt on the life of the group's Assistant Secretary, Comrade Israel Joe, was also carried out for standing against some police officers who allegedly extort monies from Okada and tricycle riders.

"This is to draw the attention of the authorities to the direct threat to the life of the Delta State chairman of Committee for the Defence of Human Rights. This threat is coming after some failed attempts on the life of the Assistant Secretary Comrade Israel Joe for standing against officers and men of Ebrumede Division before the Commissioner of Police transferred all policemen and women from Ebrumede.

"This direct threat to Comrade Dr. Prince Taiga was issued by ASP Isaac Akpene the Patrol and Guard (P&G) Otu-Jeremi Division of the Delta State Command, Nigeria Police Force. The Cdhr chairman had requested the men under the P&G to refrain from extorting 50 naira each from motor-bike and tricycle riders plying that route.

"The P&G instead of calling his men to order, attacked the chairman, tore his shirts, attempted to use baton on him and made a direct threat/vow that the chairman would be eliminated before the end of December this year.

"The threats from some men of the police to members of the human rights community is becoming worrisome and we call on the Delta State Commissioner of Police CP Adeleke Adeyinka not only to call his men to order but also nip the ugly trend of road block extortion on the bud while disciplinary measures be taken against the P&G Isaac Akpene for assault and professional misconduct", CDHR, Chairman further alleged.