I Give The Best To My Customers --- Celestine Egbune 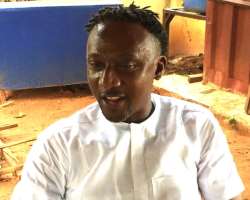 A fashion designer who deals on local and internationally made fabrics, Mr. Celestine Ako Egbune, said he ensures he gives 75-80 percent satisfaction to his clients.

Speaking with our correspodent in this exclusive interview Sunday, the Imo born craftsman, said he holds his customers in high esteem.

According to him, he came to Asaba, the Delta state capital in 2005 and in 2008 opened an outlet along the popular Nnebisi road but not without being scorned by some of the his friends who are now amazed at his success stories.

"The truth is this, whatever I can't put on, I can't give to my clients. I have one of the best fabrics", insinuating that those who claimed that there are no job opportunities in the country are not ready to use their God-given-talents to work.

While noting that there are a lot of jobs out there, he said "but the problem we are having in this country is that youths don't want to work. A lot of lucrative jobs are here, someone who knows his onion will progress here. If government doesn't create jobs for you, create one for yourself", calling on the Nigerian youths to be patient.

He disclosed that epileptic power supply has been the major challenge he faces on daily basis and inpatient from disgruntled staff who wants to make it without learning the rudiments of the job.

He also identified some customers temperaments as a challenge, saying "clients are different people with different characters. You can't satisfy everybody but customers are always right. Do what you are supposed to do at the right time".

He insisted that business owners should put on their best at all times, "put on your best in every business you are doing. Truth and God's fear should be your watchword and come out with the best, it is better", he retorted.

Egbune, who is widely known by his business name, 'Simterow', revealed that he has put in 21 years in the fashion industry said, "we have locally made fabrics and they are the best. I have professionals and I give you the best", he assured would-be clients.

He said his customers knows the worth of his work, "in every business there must be class because they know the value of what I have".

He described the state capital as peaceful as he has not encountered any problem from indigenes on like some other places where indigenes go about recklessly disturbing business environments.

On the ease of doing business in the state, he said he has carried on with ease.

He ascribed his success to God coupled with deligent, patient and giving priority place to his customers whom he said are spread across the nation.

While advising youths to he patient, he said: "to make money, you must start from somewhere. If you plan well, life is easy", adding that to retain his major staff, he pays them on weekly basis while he pays about 12 other on monthly basis, stressing that he pays close to N1 million weekly to keep the business runninging.