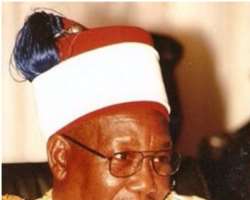 Governor Babagana Umara Zulum of Borno State has said that his government will convene an expanded security meeting to extensively deliberate on a sustainable solution to the protracted security challenges facing the state.

The governor stated this while responding to issues presented by the Shehu of Borno Alhaji Abubakar Garbai Ibn Umar El kanemi to Govenror Zulum when the royal father paid Sallah homage to the governor at the Government House in Maiduguri.

Shehu of Borno, Abubakar Garbai El kanemi however expressed concern over the security situation in the state while suggesting for an effective measure to tackle the situation depriving farmers from farming or going to their farmlands to produce food.

The royal father however commended President Muhammadu Buhari and the state Governor for their efforts so far in the fight against Insurgency.

Garba also urged the Governor to consider reopening the Maiduguri-Damboa-Biu highway to ease the hardship commuters encounter when travelling to the southern part of the state.

He added that people are worried about the recent attacks by Boko Haram insurgents on some communities in the northern part of Borno state and its cumulative effect on farming activities of the people.

Responding, Governor Zulum said his government is worried about the renewed system of attacks on communities practically in the central and northern parts of the state , assuring that an expanded meeting will be organized to review strategies that will strengthen the security architecture in the entire state.

Umara also said that an Emergency Response Team would be launched next week to boost the security situation in the state.

According to him, about eighty security patrol vehicles equipped with modern facilities have already been procured by the state government while five hundred hunters and vigilantes have also been profiled to support the existing security agencies during operations.

He also noted that his government is seriously committed to protecting lives and property of the citizenry and improve on the present security situation towards enhancing food security and creating job opportunities for the teeming unemployed youths in the state.

The governor further pledged to strengthen the traditional institutions across the state to carry out its unique traditional functions effectively in their domains.