Insurgency: We Celebrated Sallah For The First Time In 5 years, Says Shehu of Bama 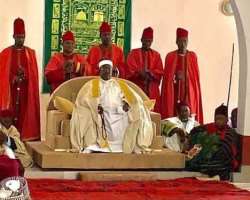 The Shehu of Bama Kingdom of Borno State, Kyari Ibn Umar El-Kanemi, has expressed delight after his people joined the rest of the world to mark the first Eid-el-Kabir celebration in his domains.

According to the monarch, this was the first time in almost five years the community partook in the religious feast celebrated across the globe by all Muslims.

"Today we are celebrating Sallah in Bama which we were not privileged to celebrate for the past five years,” an utterly elated Shehu stated on Monday.

“ Indeed we have to be grateful to Allah SWT for sparing our lives and non among us here today that is thinking to live up to this moment to grace this Sallah celebration in Bama."

Bama was the target of Boko Haram terrorists in the past, forcing natives and other inhabitants to flee their homes.

Umar El-Kanemi, the traditional ruler wasn't spared as his wife and daughter were reportedly abducted in 2014 and released two years after.

The monarch, alongside his counterpart from Dikwa, Masa II Ibn Umar El Kanemi, even fled their communities to reside in Maiduguri.

However, peace has since been restored to the area thanks to President Muhammadu Buhari and the Nigerian Army under the dogged leadership of Lieutenant General Tukur Buratai.

As part of the rehabilitation and reconstruction process, the monarchs returned in July in company of local government staff and primary school teachers accompanied by troops of Operation Lafiya Dole who regained the Kingdom back from Boko Haram terrorists .

An eyewitness account revealed that there was free movement of people around the town, especially in public places without fear of any violence or attacks by Boko Haram throughout the Sallah season .

There was also a mass prayer on Sunday for the first time in a long while, led by the monarch himself.

All these feats have been attributed to the gallantry of the Nigerian military and a decisive leadership.