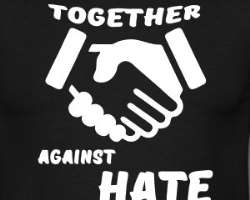 The response to terrorism in this country is bifurcated. If the perpetrator is a Muslim, then the issue becomes Islam and Muslims. Some go to the Quran to find answers. Others blame the whole Muslim community for the violent act. If the perpetrator is a Christian White person, then the issue becomes either a gun regulation issue or a mental health issue. Not helpful.

Gun violence is a public health issue. It is important not to demonize any group of people. A whole group whether it is Muslims, the mentally ill, or gun owners are not responsible for the acts of individuals. The questions should be: What is a sensible response to gun violence as to the availability of guns by type and background check? How do we deal with the root cause of hateful extremism that manifests itself in violent acts?

The culture of extremism, radicalization, hate, racism and terrorism recognizes no race, color, religion and most of all no boundaries. No nation and no society can be immune of such a culture nor can be immune of being a target. When we demonize a whole group, by design or by default, we lay the groundwork for violent attacks.

This rising challenge exceeds the typical and traditional remedies and requires re-examination of our government approach to this national crisis.

No doubt that the latest horrific domestic attacks that our nation witnessed in Texas and Ohio are painful reminder that this challenge is real and can't be sugar-coated. Time is due to define this threat as is. Time is due to re-examine its deep roots from all aspects.

This challenge require more than the words of condemning, expressing sorrow and prayers. This threat mandates real action, genuine commitment and clear vision in order to contain, defeat and uproot. We have a public health issue that requires a political solution.

One way we honor the victims of the long list of mass-shootings crimes including these latest two this past week is by rising to the occasion and not using the crisis for political grandstanding. The rising challenge of the violence and extremism epidemic requires all to unite facing this danger that keep claiming innocent lives. This challenge is not limited to law enforcement and people only. It's a serious political issue facing America.