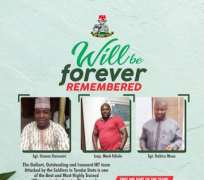 Nigeria’s president Muhammadu Buhari has sadly failed to appropriately and officially recognize the sacrifice and heroism of at least 3 Nigerian police officers who died on official duty and properly commiserate with their families who lost their loved ones.

These police officers who must be mentioned by name, were Late Inspector Mark Ediale, Late Sgt. Dahiru Musa and Late Sgt. Usman Danzumi. They died in their course of working for Nigeria and the president of Nigeria must make mention that Nigeria appreciates their sacrifice. Unfortunately in the little tweets sent out by the president’s spokesperson Garba Shehu, there was no such acknowledgment. A very rather indifferent and dispassionate statement read in part:

“The President is not indifferent to the unfortunate incident, and would take decisive action as soon as the report of the panel is submitted to him. He is following due process and procedure. Putting the cart before the horse is not President Buhari’s way of doing things.”

You do not need an investigation to confirm whether they died for Nigeria or not. The Nigerian police has confirmed that they were on official duty when they were gunned down by deployed soldiers of the Nigerian army and this is verified and as such they should be commemorated with an official statement in respect of their being on state duty, with empathy shown to their family.

Most especially in this particular case where the officers died on duty in relation to the peculiar war Nigeria is fighting against kidnapping, terror and wanton banditry. Their sacrifice must be immediately and unequivocally recognized without leaving doubt in the minds of Nigerians. This is standard procedure of all progressive governments world over.

Even if their car breaks down and they die while on state duty, they are heroes. The same if they died of friendly fire. And as such they need special honor right now. The commitment of the government to their families should be mentioned and engrained right now.

The circumstances of their death to be confirmed via probe is a second matter but cannot and must not delay a presidential recognition that officers of the state died on state duty. The probe shall not affect or aid the families of the slain soldiers. Only the recognition here and now is of value to the families.

Even when ordinary civilians die from terror, better recognition is expected from the Nigerian presidency. It is rather unfortunate that Nigeria’s leadership fails to rise up to the task at the most needed times.

On behalf of the nation I hereby salute the sacrifice made by our late and injured soldiers and commiserate deeply with their loved ones. The great sacrifices they made shall not be forgotten. I ask Nigerians to come together for their families in any ways they can, now and continuously.

Let fundraisers be made for them to support them where the government fails. We also commiserate with the entire police force and also seize this opportunity of their being the victims this time to implore they mend their ways and adhere to best practices. Our armed officers should treat us as you will like to be treated.