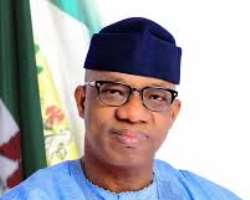 Some suspended Local Government Chairmen and heads of Local Council Development Areas in Ogun State have dragged the State Government and House of Assembly to court over their wrongful suspension.

Also joined in the suit as co-defendant is the Ogun State Governor, Dapo Abiodun.

The Ogun State House of Assembly had on May 3, issued a resolution suspending all political functionaries at the LGs and LCDAs. Acting on the resolution, the state government froze all LG and LCDA accounts in the state.

Addressing a press conference in Lagos last month, the local government chairmen had insisted that their suspension was illegal, unconstitutional and void having been duly elected by the people Ogun state for a three-year term which expires on October this year..

Their lawyer, Monday Ubani, former NBA Vice President stated that having unsuscessfully explored several avenues to make Ogun sate goverment and House Assembly to reverse their suspension, the only option left for them is to approach the court.

In the suit which has now been filed before the Federal High Court, Ogun State, the suspended chairmen are through their lawyer, Ubani asking the court to declare that the action of the state House of Assembly in suspending them was unconstitutional, illegal, null and void.

The officials are also asking the court to compel the state House of Assembly to lift the suspension placed on them to enable them complete their term.

They are also demanding for
Sum of N500,000,000.00 (Five hundred Million Naira) as damages for the infringement on their fundamental right as guaranteed by the 1999 Constitution of the Federal Republic of Nigeria as amended and the hardship they have suffered as a result of willful deprivation of their entitlements as Council Executives

No date has been fixed for hearing of the suit.