Describes him as an Icon of Democracy
By Kenneth Nwoke, The Nigerian Voice, Owerri 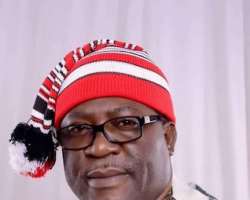 It was a glorious moment recently in Abuja when the Rotary Club of Wuse Central (Rotary District 9125) honoured one of Nigeria’s political icons, the immediate past Deputy Governor of Imo State, His Excellency Prince Ezeakonobi Madumere, MFR. He served under former Governor under the All Progressives Congress-led state administration that left office on May, 29, this year.

Prince Madumere was honoured by the renowned global organization in recognition of his “single-minded doggedness and effrontery to challenge an evil and wicked administration in Imo State even in the face of anger to his life and family which endeared him to all lovers of democracy, worldwide”.

Conferring the Merit award on the former deputy governor, Rotary Club of Wuse Central Abuja President, Rotarian (Dr) Mohammed Dan-Hassan, praised the forthrightness, commitment and diligence of Prince Madumere in the democratic struggle and entrenchment of Rule of Law in not just Imo State but Nigeria and urged other politicians to emulate him.

Said he, ‘Prince Madumere before the end of his tenure in May this year as the Deputy Governor of Imo State distinguished himself in service to the fatherland and humanity by standing against impunity, corruption and abuse of human rights. He made sure that people were put first in all his dealings as well as stood against balkanization of the state’s commonwealth. He remains one of the few vocal voices in Nigerian democracy and has through his philanthropic acts assisted numerous individuals to attain their ambitions in life”

Not done, he further described Madumere as a Man of Peace who would not mind stooping low to accommodate the views of other people irrespective of the exalted position he occupied in the state.

Said the President, “In Nigeria today, Madumere’s name stands out as a peace maker who never negotiated away the interest of the people for any reason. Many communities in the state would always remember his efforts to amicably settle their inter and intra-communal disputes some of which could have caused untold hardship on the people if not settled.

“That he was discharged and acquitted by the courts over trumped charges is a testimony of his uprightness and fear of God. Hence, we at Rotary are very much proud of his achievements both in the political, economic and human rights circles, and therefore unanimously decided to give honour to whom honour is due, by bestowing this Rotary Club Merit award on this distinguished Nigerian”, Mohammed stated.

Receiving the award on behalf of Prince Madumere, his friend and brother, Nze (Dr) Obinna F. Nwachukwu, thanked the Rotary Club of Wuse Central President and leaders for the honour done the former deputy governor. He stated that what Madumere did in Imo State was done for humanity and not for personal gains. He gave God the glory for seeing Madumere through all the travails he faced in the state including burning down his official residence, threats to his life and that of his family as well as the known case of failed attempt to impeach him based on frivolous allegations. Nwachukwu told the audience that despite being out of Imo government house, the former deputy governor would not relent in fighting for just cause and that he would always keep God first in all he does. He also pledged the award recipient’s readiness to assist the Rotary Club and other human-interest organizations to better the living conditions of Nigerians.

The event was witnessed by serving and past Rotary Club District Governors, Presidents and other personalities from across the country.