By Office of the President of the SENATE 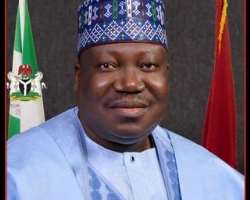 The President of the Senate, Ahmad Lawan, has commiserated with the Government and People of Yobe State over the devastating flood disaster in Ngalda Community in Fika Local Government Area of the state.

According to reports, the floods from several days of persistent rainfall destroyed over 300 houses, schools, farmlands and livestock.

Lawan shares the grief of all those affected by the disaster as well as in earlier ones in other places like Galadimawa in the Federal Capital Territory, which claimed the life of a senior civil servant; and in Lokoja, Kogi State.

The President of the Senate commends the Yobe State Governor, Mai Mala Buni, for promptly responding to the report of the disaster by directing the State Environmental Management Agency to provide relief materials for the victims.

Lawan, who is currently in Saudi Arabia for this year's Hajj, urges the relevant agencies of government at the Federal level, Development Partners and other kind-hearted Nigerians to complement the efforts of the state and local governments in bringing succour to the affected Nigerians.

He also calls on government at all levels to deploy resources at their disposal in proactively tackling the recurrent menace of flood and other environmental disasters, so that Nigerians are no longer perennial victims of preventable disasters.

Lawan assures the victims of the concern of the Ninth National Assembly over their plight. He further assures that the National Assembly will also be at the forefront of every effort deemed necessary to safeguard Nigerians against destructive environmental elements and to provide prompt and appropriate relief wherever disaster may unavoidably occur in the country.

Signed:
Ola Awoniyi
Special Adviser on Media to President of the Senate