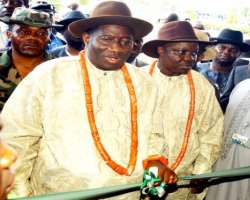 
"That is just the nature of politics. And these things go on in circles. Even during the course of this campaign, there have been months where I´m a genius and there are months when I´m an idiot. At least if you read the newspapers" said president Barack Obama about himself during the last US election.

President Jonathan Goodluck should for Modesty sake! In the way of Seven-Point Agenda - give us seven reasons why Nigerian should not call him an idiot for his planned and bounced visitation to Saudi Arabia? Our president had planned travelling to Arabia to say thank-you to the rulers for aiding dead president Yar'Adua while he was sick. Before he comes up with the seven reasons, he should hold a World Conference telling the planet that he is a bigger idiot for indulging in such avoidable foolish hypocrisy. Those of you who think that I'm insulting the president, I've news for you. Before he became president, Obama told ex-president Bill Clinton off as 'loose cannon' for his promiscuous sexual experiment with Monica Lewinsky.

I don't want to dabble into the speculation that our own president Goodluck is accused of not being a tight cannon over his questionable mingling with the wife of another big man. I'm only wondering what pace-setting Obama would say if he's aware that our president is in the womanizer club plus, how'd he react to the fact as given by OBJ's son that ex-president Obasanjo bedded his son's wife. We all have the rights to constructively lampoon our public servants however, and if they cannot take it, resignation is an option. There're those who think that Jonathan and other Nigerian leaders are God chosen who should not be criticized. To them I say, wise up! Democracy is not the same as theocracy or monarchy where leaders are seen as God-sent and Godhead. The egalitarianism of being coequals before the rules of the constitution of a given land is what apart democracy like the one practiced in Nigeria from the infallibility of the Pope in Rome or 'God save the Queen' rhetoric in England. Bashment affair is part of democratization, in fact I'd suggest a 'House of Bashment' is set up after the fashion of House of Representatives. Honourable Bashers would be paid from government coffer. Their duty would be to look for government's goofs bash upon them, after which they're sent to Senate and Presidency for amends.

Saudi ruler of course, refused to allow Jonathan to visit their land. They certainly realized that public opinion in Nigerian is against the self-serving knock-about of an idle president. I liken our president's proposed and cancelled visit as similar to an Israeli president wishing to go and thank the queen of England for assisting a scientist who had just cloned onetime German ruler Adolf Hitler. An ardent follower of Hitler as Jonathan Goodluck has become latter-day worshipper of Yar'Adua, might someday contract the British scientist who cloned Dolly the sheep to clone Hitler. Woe betides that Israeli leader who'd brush aside or overlook anti-Hitler and anti-Nazi sentiments in Israel, and venture to UK thanking the English Queen for aiding the cloner of Hitler. Israel would be in funeral mood as most would not understand the motive behind their leader visiting cloners of Hitler, their sworn enemy. In real world, that'd not happen except in the figments of imagination of Israelis in their nightmares.

Dreams can come true. And president Jonathan has to make us learn in the hard way that he's anti-masses and a pro-establishment pleaser. A trend that has not changed since Obasanjo strode our political landscape in 1999. Our extant president and his apostles have continued to proclaim that "God" made him president. Jonathan is calculatedly working in the same Godified Hail Mary pedestal wavelength like the omnipotent Pope in Rome. So why'd Jonathan with heavenly mandate on his forehead care whether ordinary human Nigerians disapprove of his actions and inaction? If the president isn't working towards extra-terrestrial goals, he could've known that Nigerians, who will vote in 2011 when he is billed to vie, disapprove of his botched Arabia trip.

The president should go on, be the magogo ruler! And travel to Canada with 200 journeymen to the distaste of the masses and the plundering of our wealth. After which, another hordes of green-white-green army of civilians should invade the UK with him on his next leg of travel. More so, a bunch of civilian recruits should go with our president to Lebanon and Dubai to complement his wife's loose foot - thenceforward, another try at Saudi approval with all Abuja citizens, this time. Christians, Muslims, atheist, sycophants, cultist, and jumping wannabes should cheer him along.

But on a serious note. The president should stop wasting our collective commonwealth on deceased Yar'Adua who put the Nation in harm's ways during his illness. The hide and seek game which he and his wife employed to starve us of information allowed Nigeria to burn for months without a leader. Their Machiavellian approach made it impossible to empower Jonathan Goodluck his 2i/c thereby, injuring country and men. Hunting goodwill and erecting monuments for such wickedly selfish and brazen ruler like late president Yar'Adua is the most primitive enterprise ever. And a dent on our collective selves.

As if our total psychology hasn't been masturbated enough and our finance plundered to please Turai and Yar'Adua, Jonathan is fronting good publicity for a leader that cursed and caused us monumental heart-break. To reward profanities of criminal rulers is to encourage would-be upcoming dictators. The best thing would have been to shame Yar'adua who in my opinion committed suicide. So that future leaders know when to resign and how not to privatize the presidency. With the grade of kidney illness he had, he was supposed not to do difficult task let alone being president of a country as buzzing as Nigeria. People with his kind of sickness are put under watchful care-giving regime. That Yar’Adua and greedy wife Turai refused to heed medical recommendation to let him retire to take care of himself made him commit suicide while Turai aided and abetted such.

It is worrisome that Turai and the Yar'Adua family from Katsina, privatized the profits from the presidency and nationalized or socialized the pain of his passing away. They should bear the brunt alone without government or public sympathy since they allocated and converted our all and all for their private self-aggrandizement. 'If you eat alone you die alone' said a local Nigeria wisecrack. Late president Yar'Adua is a fall guy before the public, Jonathan should stop using our collective commonwealth to upping his virtues that are nonexistence. The Forty-Day passing away Muslim ritual organized by this government and headed by the Vice President is another misnomer. State funds should henceforward no longer be used for such distasteful appeasement that Nigerians are hateful of.

Like Obama would say of Bill Clinton, Jonathan Goodluck is a 'loose cannon' forever contemplating an Arabia visit to hustle Hall of Fame respect for late outlaw and disliked ruler of Nigeria. Are president Jonathan's seven reasons ready why we should not call him an idiot for his Saudi Arabia wanderlust?