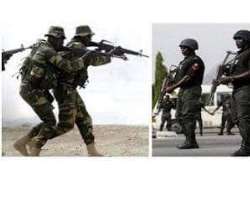 Official Police Release:
"A notorious kidnapper properly arrested and restrained by undercover men of the Nigeria Police was released by the army while the cops were shot at close range"!

"The victims identified themselves as policemen to the soldiers before they were murdered..."

The Nigeria Police has detailed these facts in the print, electronic and social media...to merely inform Nigerians....or incense us against this martial tantrum...

Who listens to citizens brutalized and extorted by the Nigeria Police as they outline their grievances as succinctly as the latter just did...

Our policemen routinely round up citizens knowing fully of their innocence but ostensibly to extort them. "Police captives" who pay up are let off while the rest are passed off...even wasted as armed robbers...especially those who try to proclaim their rights!

Lawyers to such clients are blocked at police stations and slammed with "obstruction of police investigation" if they do not back down!

As a government medical officer, truckloads of stripped young men killed extrajudicially were regularly dumped on us in public hospitals to admit into mortuaries!

I do not thrive on sentiments and harbour no sympathies when tragedies befall individuals who dispense tragedies in truckloads!

If it takes such brutal forcefeeds of wanton doses of its own medicaments for our medieval police to clean up its ways, so be it!