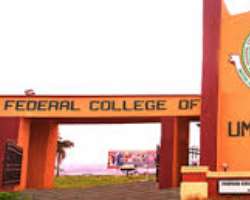 The suspension came on the heels of protests by some section of the students who claimed marginalization and intimidation.

The college Public Relations Officer, Mr Sam Otti though reluctant to react to the issue, however informed our reporter that the election has been suspended because of grievances that came up hours before the election.

He noted that the management has ordered the students back to their hostels and referred our reporter to the Dean Students Affairs of the college for further details on the matter but every attempt to get the contact of the dean proved futile.

Aggrieved students of the FCE(T), Umunze took to the streets to protest what they described as marginalization and unequal treatment of students in the election of the Students Union Government elections of the college scheduled for last Friday.

The protest carried out early hours of Friday on the streets of the Umunze town saw students in their hundreds and mostly from the Anglican and Pentecostal inclinations match round the town carrying placards that read: " say no to marginalization in FCE(T) Umunze, "We need our Rights Back", "Catholic Dominance must stop in FCET, Umunze", among others.

It was learnt that the students were irked by the fact that their candidates were disqualified from the election without strong reasons commensurate for their disqualifications, even as they complained that it had been happening in the previous election of the students Union.

They also told our reporter that some of the critical positions in the students Union Government (SUG) are reserved for anointed candidates who mostly assume the positions unopposed citing the past SUG election where offices of the President, Secretary, Financial Secretary and other key positions were not contested.

Some students who spoke to newsmen claimed that this scenario was exactly what happened in the year 2013 when they were denied their rights to elect who should govern them which led to protests that resulted to suspension and termination of admissions of most students of the college.

Our reporter gathered that the protesting students earlier filed a petition to the college management demanding for a fair hearing on why the students were disqualified from contesting but their appeal was not given the right attention it deserved prompting the protest.

Speaking to our reporter, the Chief Judge of the current SUG, Rt. Hon. Justice Alaebo Promise said: ‘’we were protesting against so many irregularities regarding the electoral process in the ongoing students Union Government election in the college whereby some of the critical positions of the SUG were declared unopposed for just no reason.

"We were demanding from the school to give us evidences of their disqualification. We actually put calls across to the management but we were told to do whatever we want to do. That statement provoked us and we said let us show them that we are not happy with this things.

"It now looks like SUG is becoming organizational platform where they bring candidate and then marginalize every other persons. SUG is a statutory body that must exist in every tertiary institution. They should give us right to exercise these rights.

"The management has done underground work that leads to the imposition of candidate on the students. This simply means appointment or selection. When a presidential aspirant is presented unopposed, that means there was no election. We were having this emotional feeling that the management was behind this every year unopposed government because if they were not, they should have questioned it. If they were keeping quiet about it that means they knew something about it".

Promise who is also the President of Anglican students in the college said that the system of election needs to be reviewed and changed. He said that open voting system is long outdated and so many students have been victimized through the system adding that plans should be made for secret balloting.

Meanwhile, many students were pointing accusing fingers on the catholic leaders in the school who were alleged to be brains behind the disqualification of students as well as influencing the choice of candidate through the Nigerian Federation of Catholic Students (NFCS). They claimed that the catholic leaders have deprived the students of their rights to vote and stand for an elective position in the college, some even claimed that the NFCS President was ninety-nine percent likely to emerge the SUG president after his tenure thereby relegating other catholic candidates and candidate of other denominations to the background, since some of them were all screened out before the election.

A catholic student of the school who did not want to be mentioned told our reporter his ordeal during his NCE days in 2013, thus: I was in the SUG of 2013 set when all this things started. It all started in the church, I was a pure catholic. I have never seen a higher institution where you impose someone on the students that they have to take it whether they like it or not. It is not done. They brought out somebody and told us we must vote for the person to the detriment of other candidates in the church which was not fair.

"Many of these students will be leaders and politicians tomorrow and when they were given insight that it is their birth right that leadership goes to them, they go outside and make it a do or die affair" he concluded.

Speaking on the situation, the chaplain of Anglican Chapel of Ascension FCE(T),Umunze, Rev. Tochukwu Akaegbobi said that a lot had happened in the school which was why the students took to the streets, adding that the students of other denominations in the school have been intimidated and pushed to the wall.

The Anglican Priest said that nobody was against a church bringing out a candidate but imposing it on the students was wrong. He urged that the students should be allowed to exercise their franchise as it is an affair that concerns the students.

Meanwhile, when contacted, Rev. Fr. Ben Tochukwu Odika said that the catholic church in the school have nothing to do with the students Union government politics, stressing that it was not a church affair. He said SUG election was a student’s affair and strictly meant for them.

Fr. Odika noted that the students supposed to have their election on Friday but due to circumstances best known to the organizers, the election didn't hold again, adding that some Anglican and Pentecostal students wanted to use that as an opportunity to disturb the already existing peace of the institution by carrying out the protest.