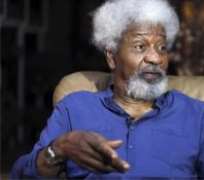 The condemnation of the arrest of Omoyele Sowore continued yesterday with the Noble laureate, Prof. Wole Soyinka, lamenting that the country had been thrown into a cycle of suppression of citizens' rights.

The police, at the weekend, accused Sowore, the convener of #RevolutionNow protests and the Global Coalition for Security and Democracy in Nigeria of trying to force a regime change in the country. They alleged that the move by the pro-democracy activist and presidential candidate of the African Action Congress (AAC) in the last general elections amounted to treasonable felony and an act of terrorism. Consequently, Sowore was arrested in the early hours of Saturday by operatives of the Directorate of State Services (DSS) in his apartment.

To Soyinka, Sowore's arrest is a sad reminder of a similar unfortunate development that occurred during the era of the late former Head of State, Gen. Sanni Abacha.“This is all so sadly déjà vu. How often must we go through this wearisome cycle? We underwent identical cynical contrivances under the late, unlamented Sani Abacha, when he sent storm-troopers to disrupt a planning session for a similar across-nation march at Tai Solarin School, Ikenne.”The Nobel laureate, in a statement yesterday, noted that the deployment of “alarmist” expressions such as “treason”, “anarchist” and “public incitement” by security forces has become so predictable and banal that they have become meaningless. He said: “Beyond the word 'revolution', another much misused and misunderstood word, nothing that Sowore has uttered, written, or advocated suggests that he is embarking on, or urging the public to engage in a forceful overthrow of government. Nothing that he said, to me, in private engagement ever remotely approached an intent to destabilise governance or bypass the normal democratic means of changing a government.

“I, therefore, find the reasons given by the Inspector-General of Police, for the arrest and detention of this young ex-presidential candidate totally contrived and untenable, unsupported by any shred of evidence. His arrest is a travesty and violation of the fundamental rights of citizens to congregate and make public their concerns.

“The same pattern Pavlovian conduct manifested itself under yet another supposed democratic ruler who personally declared that the gathering of civilians to deliberate on, and propose a constitution for the nation was 'high treason', and would be resisted by the full rigour of state power if we persisted.

“And yet again, even a faceless cabal under yet another civilian regime refused to be left out of the insensate play of power. A march on Aso Rock calling for an end to governance by a ghostly entity was slated to be crushed, but fortunately, a conflicting balance of interests decided in favour of a reduced trajectory of protest. And so on and on and on, in a nation which continues to speak at once through both sides of the mouth, spewing out the same treason monotone, as if this was a magic incantation that could substitute for the venting of mass feelings, even as collective therapy!

“May I invite the Inspector-General to wade through the daily journals of the past few weeks and months, read and digest the calls by numerous sectors of society – across professions and national groupings – for demonstrations against the parlous conditions of society, all identifying ills to which attention must be drawn, and urgently, through mass action?”

According to Soyinka, demonstrations and processions are time-honoured democratic ways of drawing not only the attention of government to ills, but of mobilizing the public towards a proactive consciousness of their condition, and thereby exhorting civil society also to devise means of ameliorating their condition through their own efforts.

“Religious bodies have urged such remedies, so have civic associations. The ready recourse to arrest, incarceration and threats to civilians are ultimately counter-productive. They alienate the citizens, erode their confidence in governance responsiveness, and thereby advance the very extremist nightmare that security agencies believe they are acting to thwart.

“If we cannot learn from the histories and experiences of other societies, let us at least learn from ours. Freedom is not so glibly qualified. It cannot be doled out like slops of charity from soup kitchens. Let the police stick to their task of protecting and managing protests, not attempt to place their own meaning and declaration of intent on bogey words like revolution!”

A constitutional lawyer, James Ezike, who flayed the arrest, said: “If it is true that Sowore is under arrest, that would be the greatest blunder of Buhari. It was not 'June 12' that destroyed Abacha. It was the incarceration, not the execution, of Ken Saro Wiwa that finished Abacha in the eyes of the world.

“The lesson of history is that all modern societies were the results of treason. America (United States), Russia, China, France, Portugal, Spain and United Kingdom experienced it. The 'Glorious Revolution' was what modernized the United Kingdom.

“I don't know what will become of us if we add treason to the mix of RUGA and Boko Haram insurgency (which never resulted in trials for treason or any trial at all). Herdsmen terrorism and brigandage to the mix of treason, we would have produced and planted a nuclear bomb in our land,” he said.

The Ohanaeze Ndigbo Youth Council yesterday warned the Federal Government that the continuous detention of the AAC presidential candidate would attract sympathy for him from the international community and discredit President Buhari's second tenure if not released and the planned protest allowed to hold today.OYC, in a statement in Abakaliki by its National President, Mazi Okechukwu Isiguzoro, said Sowore's arrest was capable of doing more damage, “if the proposed protests start today as he would be made a hero if he is made to remain in detention.”

The DSS yesterday confirmed that its operatives arrested Sowore. The agency's spokesman, Peter Afunanya, who made the confirmation while briefing journalists in Abuja, said Sowore was taken into custody for allegedly plotting a forceful removal of a democratically elected government in the country. He said that the secret police were “aware” of information that Sowore had allegedly been in touch with some foreign actors to destabilise Nigeria

The DSS official, who declined to give details on where Sowore is being kept and when he would be arraigned in court, said the security organization would not just “sit back and watch the convener of the protest and his cohorts threaten the peace and unity of Nigeria.”

Meanwhile, President Muhammadu Buhari has warned those calling for a “revolution” to allegedly topple his government to employ an appropriate electoral process rather than seeking undemocratic and violent means.

The president said his administration respected and upheld the right of every Nigerian to peaceful protest and civil campaign–whether to raise awareness on issues, and even oppose the government. “It is the inalienable right of all citizens of the Federal Republic of Nigeria to do so.”

However, the Presidency in a statement by Senior Special Assistant on Media and Publicity, Garba Shehu, warned that there is a distinction between a peaceful call to protest and incitement for a revolution.The presidency noted that the organisation championing the planned action is not fronted by any serious public faces. It called on the sponsors and organisers to have the decency to come forward and make their identity known – out of respect to all Nigerians.

This, according to the Presidency, is so that Nigerians can be fully aware in whose name the “revolution” is being proposed and who the beneficiaries may be.“Less than six months ago, Nigeria held simultaneous presidential and parliamentary elections. Both contests were won resoundingly by President Muhammadu Buhari and his All-Progressives Congress party. The campaign was observed, and results were confirmed by international election monitoring groups and observers. The result was even contested in court.

“The ballot box is the only constitutional means of changing government and a president in Nigeria. The days of coups and revolutions are over.“Those making the 'revolution' call hide behind the veil of social media modernity. But without revealing the identity of their sponsors this shadowy campaign is no better, and no more democratic, than the days of old.”