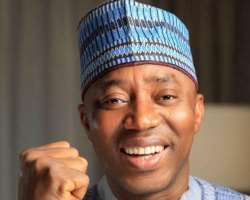 Security agents believed to be personnel of the State Security Service (SSS) have arrested Omoyele Sowore, the publisher of Online News platform, SaharaReporters.

“Mr Omoyele Sowore is currently in the custody of the SSS. His phones have been confiscated. This is a panic response from a decayed regime that is so sacred of its own shadow.

“The #RevolutionNow Movement has come to stay and no dictator can stop it.”

The statement said, “Operatives of the Department of State Services have arrested pro-democracy activist and the convener of #RevolutionNow Protests, Omoyele Sowore.

“It was gathered that Sowore was picked up at his apartment in the early hours of Saturday.

“Sowore posted a distress tweet at exactly 1:25 am with an eyewitness confirming that his phone was forcefully taken from him.

“He also tweeted ” Ja p”, confirming his phone must have been seized while trying to raise the alarm about his arrest.

“His arrest and detention are not unconnected to #RevolutionNow, a series of planned protests against bad governance in Nigeria scheduled for August 5, 2019.