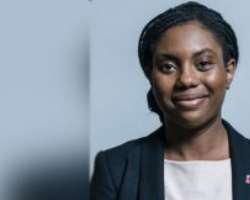 Kemi Badenoch made the announcement on her twitter page on Tuesday, following her appointment on Saturday.

“I'm humbled to have been appointed a junior minister at the DfE. A huge privilege to be able to serve and make a positive difference on a number of issues close to my heart.

“Thank you for all good wishes and kind messages of support received. I also look forward to working not just with @Conservatives colleagues but cross-party and grateful for the warm welcome from @TracyBrabin and @SteveReedMP who no doubt will be keeping me on my toes!”

Badenoch is a Member of Parliament representing Saffron Walden constituency in the UK.

She was born on January 1980 in Wimbledon, London to parents of Nigerian origin.

Kemi Badenoch was first elected as Member of Parliament Saffron Walden on 8 June 2017 and also the first woman to represent that constituency.