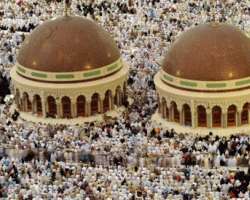 The number of Nigerian pilgrims that have died at this year's Hajj in Saudi Arabia has risen to five.

The official update given by Dr. Kana followed a report earlier in day credited to the Head of the medical team of NAHCON in Madinah, Dr. Hamidu Liman, which put the number of those that died at two.

An aged woman from Argungu, Sokoto State, had been reported dead and buried last Friday, according Liman after the Jummat prayer.

Four of the deceased died in Mecca. In addition, four of them are males, with Katsina State accounting for two deaths – a male and a female, while Nasarawa, Sokoto and Kano had one each.

“In terms of wellbeing of pilgrims so far on the medical side, we are yet to encounter any serious situation or potential outbreak of any disease, except for the extreme temperatures, which we admonish our pilgrims to stay indoors as much as possible, and if they must go out, they should cultivate the use of umbrellas and consume plenty of cold water.

“Regarding concerns of the deadly Middle East Respiratory Syndrome Corona Virus (MERS-CoV), pilgrims are strongly advised to stay away from camels which are the reservoir and vector for the transmission of the disease,” Kana said.

He also disclosed that over 15 million doses of drugs had been consumed by Nigerian pilgrims at no cost to them, adding NAHCON prepared a drug forecast for the entire operation, including drugs for HIV/AIDS and Tuberculosis which were donated by the Federal Ministry of Health while the remaining were procured by the Commission, both onshore and offshore following government due process.

Kana also disclosed that all the families of the deceased had been informed accordingly by the various state pilgrims welfare agencies, while the Chairman/CEO of NAHCON had also informed the Presidency as well as extended letters of condolences to the governors of states affected.

Meanwhile, NAHCON has in a statement issued by its Head, Public Affairs, Fatima Sanda Usara, reassured intending pilgrims and the general public that the airlift of Nigerian pilgrims will be concluded before the closure of Saudi Arabian airspace on August 6.

The statement said that, Osun, Oyo, Lagos, Nasarawa, Kogi, Kwara, Ondo, Ekiti states, had all concluded airlift of pilgrims to the Holy land, while, Edo with 40 pilgrims left, Ogun with 141 left, Yobe with 145 residual, Kano with 292 to go, Gombe with less than a flight, Katsina with 83 per cent completion all have one flights remaining and will be merged with FCT which has its final flight on Wednesday.

“Therefore, though certain drawbacks were experienced some days back, the obstacles have been addressed and operations will continue unhindered until all intending pilgrims are moved to Saudi Arabia. The Commission hopes to conclude movement of pilgrims by 5th of August,” Usara said. (THISDAY)