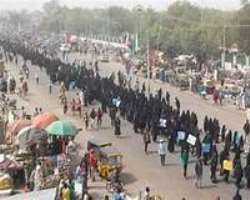 I will start my admonition using the popular theoretical framework of the trolley problem, a thought experiment in ethics.

The general form of the problem is this:
You see a runaway trolley moving toward five tied-up (or otherwise incapacitated) people lying on the tracks. You are standing next to a lever that controls a switch. If you pull the lever, the trolley will be redirected onto a sidetrack, and the five people on the main track will be saved. However, there is a single person lying on the sidetrack. You have two options:

Do nothing and allow the trolley to kill the five people on the main track.

Pull the lever, diverting the trolley onto the sidetrack where it will kill one person.

This theory has several variations but the core of it, remains which is the more ethical option?

I am a media and development practitioner and psychologist and throughout my career, I’ve noticed that people tend to move through six stages on many an issue and I refer to these stages as the Six i’s.

The first stage is simply ignorance, in which we are mostly unaware of the happenings and needs outside of our own little hamlets.

Growing up as a middle-class boy in Lagos, I was ignorant about issues like poverty. Foremost on my mind was how I could save up enough money to buy a pet king snake, something that also preoccupied my mother but for a very different reason. When I was in the third grade, I did not know that almost half the world could neither read nor write. When I was in the fourth grade, I did not know about there was a place called Kafanchan. I knew beggars, but I didn’t understand the workings of the almajiri system as practiced in the North. I was ignorant of these things. I did not know.

I did not know then as a child, but like many I am aware of facts about the world like this today as an adult. And it is difficult to imagine how a person living in a rich country today in the age of cable television, Facebook, Twitter, Instagram, and smartphones could remain in a state of ignorance about the lives of people. But life happens, and as the life-stages roll by, we become absorbed with finding the perfect skateboard, the perfect hair, the perfect college, and the perfect life partner. Then we long for children, then worry about whether our children are normal (or sufficiently above normal), whether we have become self-actualized in our career, dream about buying a bigger house (for the benefit of the children, of course), contemplate whether we have made the right friends and social connections, fuss about our creaky backs and declining health, long for the freedom retirement brings, then worry about the purposelessness we feel once we get there. At every stage of our lives we can find an adequate excuse to fail to engage outside of our self-contained, self-absorbed little world.

In a second stage we may move past ignorance of the needs of the global poor, but unfortunately to indifference, where we are cognizant of the needs of our global neighbor, but in practice are too concerned with our own lives to care for them.

I believe it was in the seventh grade when I learned that there were starving people in the world. I remember when I heard about this in church, and I remember wondering briefly what it would feel like to starve. But I didn’t reflect on it long. I was too worried about whether my friend Mike was going to buy one of the new skateboards with the polyurethane wheels, because then I would have to buy one too, or feel left out, especially if Kevin, the new kid on our block, got one. Then Mike would skate around on his polyurethane wheels with Kevin, and I would be left behind on my old skateboard with metal wheels, flying off the front of it every time I hit a tiny pebble on the sidewalk.

I wasn’t living in ignorance anymore, but I was living in indifference, the second i. Perhaps we nominally care about our global neighbor, but in the great thought-hierarchy that governs our brains, thoughts of others take a low precedence to thoughts about what we will wear that day, how to attract desirable members of the opposite sex, how to deal with an ill-tempered boss, or how to get ahead in life (in whatever special way that applies to us). In the end, that precedence amounts to practical indifference.

In subsequent stages we may move to a stage of idealism, in which we try to absolve ourselves of guilt by giving our resources thoughtlessly and to little effect. Hopefully, we later begin a stage of investigation, in which we learn to understand the real needs of the poor, and then of introspection, when we begin to thoughtfully reflect and consider which of the many roles we can effectively play in the effort to care for our neighbor. After this we are able to successfully begin a stage of impact, in which we are able to engage in a meaningful and fruitful relationship with our neighbors.

We are largely ignorant of the issues we are faced. We are playing politics with leadership, whether closet Shiites or the protesting ones. They are everywhere, many Nigerians don’t actually know of any sect or doctrinal division in the practice of Islam. Many do not know the ideological drive of these people, but we are embarking on a familiar terrain of tackling a problem without addressing it.

Like the trolley questions, the Shiites is one that raises ethical questions, many do not know why El-Zazakky is being held, and others know but don’t care.

Do they deserve the rights to protest, why is government incapable of speedily prosecuting El-Zazakky. What role does Iran play here and what is the Nigerian state’s position? If the leader of the Shiite’s die in detention, what does it portend?

Is the rushed proscription an answer, why does all these on an indifferent glance look like a reenactment of Boko Haram. Are the Shiites armed, deadly, is the government and its security violating human rights. A sizable population are ignorant, indifferent, are we looking at the ideal, is this crisis being looked at with any introspection. What do we know; a corp member has paid the ultimate price, who will investigate the death of the senior cop that was shot. When two wrongs don’t equate a right, it remains a head you loose, a tail you still loose, and only time will tell