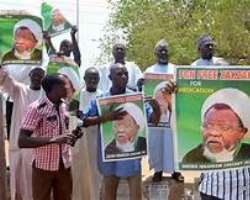 Foremost anti-terrorism group, the Coalition Against Terrorism in Nigeria (CATE), has joined Nigerians to commend the proscription of Islamic Movement of Nigeria (IMN) as a terrorist group.

Following recent spate of mindless protests in the nation's capital, the Federal Government, on Friday, obtained a court order to banish the Shiite organisation.

Justice Nkeonye Maha of the Federal High Court Abuja issued the order in a ruling which designated the activities of the Shiite group in any part of Nigeria “as acts of terrorism and illegality.”

In a press statement signed by Gabriel Onoja, its National Coordinator, on Saturday, CATE hailed the development, describing as a testament of the FG's responsiveness to the calls of Nigerians.

While hailing the law security agencies for keeping the radical sect in check until the proscription, the group, however, urged them to be on red alert in case of potential attacks.

Read the full statement below:
Gentlemen of the press, on Friday July 26, 2019, Justice Nkeonye Maha of the Federal High Court in Abuja gave an order proscribing the sectarian Shiite Islamic Movement in Nigeria (IMN) as terrorist organization. By virtue of the order no person or group of persons are allowed to participate in any form of activities involving or concerning the IMN “under any name or platform” in Nigeria.

We find this development commendable and a testimony to the fact that the government is responsive and considerate of the expert opinions expressed by entities that work in security and peace-building. It is proof that the calls that has been made by stakeholders got to the hearing of those in government.

The Coalition Against Terrorism in Nigeria (CATE) has been at the forefront of the calls for the Federal Government to proscribe IMN the same way the government of Kaduna state outlawed the extremist organization after the release of a white paper that followed a Judicial Commission of Inquiry. CATE, being an organization with knowledge of the dynamics of terrorism based on experiences from its field work, had seen the terrorist inclinations of IMN because they spread their violence into Abuja and other major city.

Had the IMN leader, Mr. Ibaheem El-Zakyzaky not been detained as part of his trial for treason, murder and other offenses before a court in Kaduna state, the terrorists would have looked for another excuse to carry out the same violent acts of terror they are currently engaged in. While many people only became aware of IMN after it entered Abuja, the terror organization has been a long time in evolving; it has a strategy of unnoticeable scaling up of the phases of its strategy, an approach that had worked well for it in over three decades until it met a government that did not brook its nonsense.

For instance, the process of recruiting and radicalizing youths began with training those that are today commanders of IMN; they had in turn trained those that are city leaders, who trained cell leaders, who trained unit leaders – all in a way that created a pyramid command structure. A saving grace is that El-Zakyzaky, who sits atop that pyramid, is on trial and in detention. Their clamour for his release, aside being an excuse to implement their terrorist agenda, is also because they need him freed to implement the final phase of the evil they have planned against Nigeria.

Nigerians must also note how IMN began as a group that was harassing commuters on Zaria Expressway in Kaduna state, transited into a rabble that denied a Chief of Army Staff the right of way before attacking troops. It was to later invade Abuja with its members launching projectiles against troops and policemen before trying to hijack a military convoy transporting weapons. In the final days before the court did the needful, IMN had become a monster that engaged on industrial scale arson against public assets, it went as far as trying to overthrow Nigeria’s democracy during an attack that left a couple of policemen dead and others with life threatening injuries. Within hours of attacking the National Assembly, the terrorist assassinated a Deputy Commissioner of Police, a journalist and many other Nigerians as part of a campaign to instil fear in the population and compel the release of their leader without recourse to judicial processes.

Gentlemen of the press, it is our belief that Nigerians will avail themselves of themselves of details of these evil acts of IMN so that they can better appreciate that its proscription by the court as a terrorist organization was the best possible outcome for Nigeria. We will also like to remind Nigerians of the import of a group being designated a terrorist organization, because it implies speaking positively of such a group would amount to sympathizing with terrorists, which has prescribed punishments. The essence of raising these points is to ensure that Nigerians do not innocently run afoul of the law when they erroneously think they are making social intervention when in reality they are supporting terrorists.

CATE therefore advise Nigerians to be wary of acts that could make them to be held as being part of IMN terrorist infrastructure that has been proscribed by the government. Nigerians should avoid joining their protests because there have been instances in the past where some misguided people joined such protest under the wrong impression that they were in solidarity with IMN. Nigerians must also avoid issuing statements or making other forms of communications that express support for IMN since these will by default qualify as activities carried out in pursuit of terrorism.

To the law enforcement, military and security agencies, CATE gives kudos and commend them for keeping IMN in check until the court proscribed them in accordance with the law. They must now intensify efforts at ridding Nigeria of the kind of extremism and terrorist inclination represented by IMN; they should, on the strength of the court order and a subsequent publication to be made by the Federal Government, ensure that terrorists never again openly hold violent protests to the detriment of peace in Nigeria.

They must also ensure diligent prosecution of all IMN fighters that has been arrested in the course of the violent protests and they should be charged with the highest offense possible since it is important that they are made to know that acts that deprive others of their lives will not be condoned even from terrorists.

Attention must also be turned to those that have been financing IMN as part of a ploy to use them as a political tool. CATE had expressed concerns in the past about how opposition politicians were financing and arming IMN in order to use them to sabotage the incumbent government. Those found to have finance IMN in this fashion should now be investigated and brought to book for the damage they have done to the country.