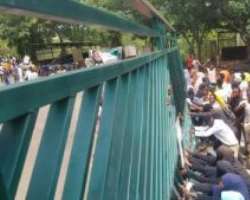 Here are the major differences between Sunni and Shiite Muslims

The Federal on Friday obtained a court order as a legal backing for the proscription Shiite Islamic group known as Islamic Movement of Nigeria.

The decision followed a security meeting by the Nigerian government with top security officers after protests by the Shiite Islamic Movement turned violent in parts of Abuja. cracked down on a Shiite Muslim group, winning a court order that bans its activities, the Punch newspaper reported.

The order came amid clashes between the police and the group, the Islamic Movement in Nigeria, that killed several people, including a police officer and demonstrators.

The police and IMN supporters have clashed regularly amid demands that the government release the group's leader, Ibrahim El-Zakzaky, who has been in detention since 2015.

Clashes in the capital of Abuja in October claimed the lives of about 50 of the group's members.

Nigeria, with almost 200 million people, is almost evenly split between a mainly Muslim north and a predominantly Christian south. The north is overwhelmingly Sunni, but there are an estimated 3 million Shiites.

Who are the Shiites?
A Shiite is a Muslim who follows specific religious traditions. Shiites are the second-largest branch of Islam, after Sunnis. A Shiite believes that Mohammed’s son-in-law, Ali, was his legitimate successor as political and religious leader and prophet.

Shiites believe that only Allah, the God of the Islam faith, can select religious leaders, and that therefore, all successors must be direct descendants of Muhammad’s family. They maintain that Ali, Muhammad’s cousin and son-in-law, was the rightful heir to the leadership of the Islam religion after Muhammad’s death.

The Sunni majority got their way, as Abu Bakr became the first Muslim caliph and successor of the prophet. … One of the most crucial differences between Shia and Sunni Muslims is the importance that the Shiites give to Ali, whom the Sunni do not recognize as being the prophet’s rightful successor.

What is the difference between Sunni and Shiite Muslims?

The Iranian Revolution saw a new and radically different power in the Middle East — and the only Shiite one in the region.

“In the early days, Iran had a stated desire to export its Islamic revolution, and its Supreme Leader styled himself as the leader of the whole Muslim world, making Sunni Arab leaders nervous. This had some negative consequences for Shiite Muslims in the region,” Kinninmont told CNN.

Kinninmont explained many Middle Eastern states started to suspect their small Shiite populations of disloyalty, fearing they would support Iran. She added that Iran did support some revolutionary groups in other countries at this time.

The growing suspicion between the two sides was compounded by the 2003 invasion of Iraq, which saw a Shiite-dominated government come to power after the toppling of Saddam Hussein’s regime.

“This really alarmed the traditional Sunni rulers of the region,” said Kinninmont. “There was this mounting fear that Iran and Iraq would work together in collusion against the other Arab states.”

THE RAINBOW, with online reports