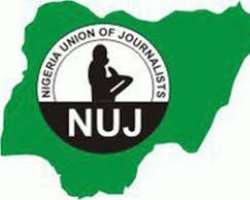 The newly inaugurated Chairman of the Nigeria Union of Journalists (NUJ ), Borno State Council, Alhaji Bulama Talba on behalf of all working journalists in the state extends profound gratitude to all the union stakeholders for their contributions that led to a successful 2019 State triennial Delegates Conference

A statement issued by the State Secretary of the NUJ, Malam Mohammed Ibrahim Saturday said the Union remained indebted to the government and good people of Borno state to the untiring support the union enjoys which has made it what it is today.

"Our immense gratitude goes to the Executive Governor of Borno State Professor Babagana Umara Zulum and his Deputy, the Shehu of Borno, Security Chiefs and Heads Of Paramilitary Agencies as well as all Media Executives alongside the entire Labour Movement and development partners too numerous to mention.

"The Union will continue to play it's much needed role in entrenching lasting peace across the state through ethical reportage to promote the image and interest of our dear state.

"We equally associate with the recovery drive of the Federal and State governments and remain fully committed to actualise programmes geared towards return to normalcy and dignity for citizens."