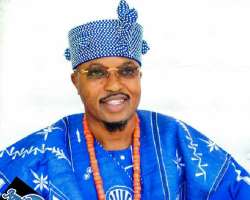 The Oluwo of Iwo, Oba Abdulrasheed Akanbi, has written an open letter to President Muhammadu Buhari, warning him of an impending war.

The monarch wrote Buhari over the decaying security situation in the country at the moment.

In his letter, Oluwo also recommended short and long term solutions to tackle the menace, stressing the need for peace and unity over any kind of knee-jerk decision.

“I am compelled to write at this fragile moment our togetherness is under threat. I rarely write, not because of what or how but as a proactive father, I love actions. But for the purpose of Nigerians, my race and my promising subjects, I chose to communicate this solution based epistle for two things – to avert journey of no return (war) and kill negative ambitions with alternative means.

“The recent security threat emanating from incessant kidnapping by bad elements or alleged Fulani herdsmen most especially in the south western Nigeria is not without general knowledge.

“One of those suggestions was adopted by some State Assemblies recently. I met Nigeria as Nigeria. There were hurdles but our fathers managed themselves despite diverse ethnic background. As a pragmatic leader, I’m hopeful you are on toe to run peacefully.

“’Peace cannot be achieved through violence; it can only be attained through understanding.’ Ralph Waldo Emerson.

“Education is a tool to peace, though does not guarantees peace. Understanding is the primary key to peace. Had Yugoslavia, Liberia, Sierra Leone knew this, maybe they would have avoided blood bath. I was caught up in the Liberia war and even fought along Charles Taylor as a Rebel on the NPFL, the havoc wrecked all. War knows no status, age, influence, identity.

“Mano and Gio tirelessly committed atrocities against the Kru tribe, the whole nation was tore a day to Christmas celebration (December 24th, 1989) led by National Patriotic Front of Nigeria under the watch of Charles Taylor. It consumed over 250,000 souls including leaders despite plea for dare lives. Majority paid the debt they didn’t owe. War is an enemy of identity.

“War turns the rich to beggars and something to nothing. I’ve seen many survivors of war including Professors, Doctors, Ministers, and even kings lining up with plates begging for food. Human eating human during war. Nothing except your cloth is yours in a war zone, provided not naked at the point of attack. Is this what some are drumming?

“Who will pray to line up begging for food? Do this people know about war in 21st century? As a responsible father, I will never go with bloodshed. No father will pray to loose his children. No father will want to be childless and turn barren at menopause. No one will prefer turning a beggar in the land of hope. There is an understandable way of killing a rat without shedding blood.

“We shouldn’t forget in haste event have overtaken voodoos and traditional war instruments. A fighter jet can destroy thousands in jiffy. Mr President, I say no to war. War is older than us all. ‘Òkun ki o ruru, kawa ruru,’ meaning you don’t fuel a burning fire.

“Mr President, I want to urge you, call every opinion leaders to order to stage a caution of their utterances at this moment. If you can’t be peace we want, don’t be agent of chaos. In my own assessment, your excellency, the solutions to the trauma are two – Short term and long term.

“My domain is the highest host of the fulanis in Osun State. Before the escalation of the kidnapping menace, I’ve visited the Fulanis in my domain mandating formal education and threatened to arrest parents of teen children rearing cattle during school hours.

“They obliged although not completely. Recently, Seriki Fulani brought one of their children who graduated from university to my palace. Understanding is key while education is the door to peace. I want to appeal to your excellency to assent a legislation that will compel education for children and enact strict punishment for parents refusing to educate their children.

“Priority can be placed on the Fulanis with preferential monitoring of nomadic settlements. This option will secure their future to be engineers, pilots, doctors, Professors , kings, bankers , ambassadors etc and not kidnappers. Additionally, growth is gradual.

“Our security should go digital. If not now, who else is our Messiah? Nigeria security should be strengthened. The boost can optionally be assured through mandatory and timely provision of electronic national identity card for everyone on Nigeria soil such that the security force can accost and demand for identification anywhere anytime. With digital ID card, the security can track suspicious members of the society.

“Your excellency, as a short term mechanism, kidnapping cases should be given accelerated hearing with death as penalty for culpable kidnappers. The famous Ralph Waldo Emerson was remembered quoting that ‘there are five enemies to peace: ambition, avarice, anger, pride and envy.’

“Enacting such severe law will dissociate perpetrators from the five enemies of peace. We can’t continue cold handling and expect cold retort. Kidnappers are killers. If caught, they should have a taste of their intention.

“Your excellency, I want to appeal for quick response to enact a law in collaboration with the national assembly for quick trial and execution of culpable kidnappers. There is no justifiable excuse for injustice. Injustice is only justified when matching penalty is meted. The change is in action.

“Let two, three to four culpable kidnappers taste death, then, we will breath air of peace. ‘Peace is not only better than war, but infinitely more arduous.’

“Additionally, there should a special federal government sponsored enlightenment programme for herdsmen to halt farm attacks. I have done it in the past. I tutored Fulanis in my area on ranch and provision of hay. You walk your cattle miles to feed them. Acquired nutrients almost used while covering miles walking them back home.

“Even in the course of covering miles of journey in the bush, there are many dangers. The federal government should legislate advanced training on cattle raising as obtainable in developed nations. Construct ranch in your personal land, and feed them with hay. Hay is the best food for the cattle. There is little nutrient in silage.

“Formal learning should be made compulsory for herdsmen while government can as well sponsor them overseas for training on ranching. In a final note, let me state it unequivocally that Nigeria is indivisible. The only voodoo to war is peace not traditional concoctions in digital age. We are on the part of greatness.

“We must not for once be drunk with deception of war. Mr President, my words are given for your attention. Nigeria is yours and mine. While I pray for wisdom greater than that of Solomon to constructively pilot Nigeria, do accept the assurances of traditional rulers support at effecting solutions mentioned and conduct Nigeria’s affairs.”