... Vow To Lead Protest Against Police Until Justice Prevails
By Kenneth Orusi, The Nigerian Voice, Asaba 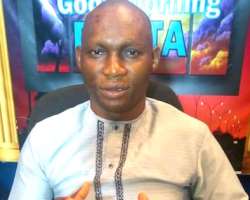 A human rights activist, Prince Kehinde Taiga, has called for the immediate legal action to be taken against the police officers who intercepted and impounded the Toyota Sienna Space Bus with Reg. AGL 822 EY belonging to late Mrs. Ughochukwu Grace Dagbo, a 42-year-old mother of four who was killed by armed bandits.

Prince Taiga, Delta state Chairman, Committee for the Defence of Human Rights (CDHR) in a telephone conversation with our The Nigerian Voice alleged that the untimely death of the female decorator was ochestrated by the police.

"In our view on this issue that occurred, we are looking at it that it can be a collaboration or a plan between the police and the armed robbers because if the police did not take away the vehicle of this woman she won't have lost her life".

While accusing the police of what they would get in any case instead of carrying thorough investigation, Prince Taiga, said: "the police should be prosecuted accordingly because they are the cause of the death of that lady".

His words: "the problem of the police is how much am I going to make from this case. They are no longer there to protect lives and property neither are they there to discharge their duties in order to serve their fatherland but what they are going to benefit at the end of the day.

He continued: "that is their problem and that has destroyed the image of the police. So, all the police involved in this very act should be prosecuted", he insisted.

He observed that when a crime occurs in an area, the police are expected to raid the area where the crime took place to investigate and apprehends the culprits, alleging that the reverse is the case.

"Because if somebody dies in an area where people live. The police should come and raid everybody that are living in that area where the crime was committed. But when they come to the scene of the crime, they will raid everybody not for them to arrest the culprit but to extort money from them", stressing that the police on duty should not be allowed to go, they should face the law.

He further accused the police of taking the law into their hands by invading the privacy of citizens, "what they do is to check peoples' phones, extort money from drivers and passengers as the case maybe which is unlawful.

Meanwhile, he disclosed that the Committee for the Defence of Human Rights, would take to the streets if the police on duty are not tried.

Hear him: "if the police on duty on that day that took her vehicle from her to the station are not prosecuted, we are going to take a protest against them because they violate peoples' rights".

He alleged further that sometime ago, the police heavily armed extorted a whooping sum of N100, 000 from a man, "the police took the young man to the ATM where N100, 000 was extorted from him. That is armed robbery not even a police work because they were armed. When money is collected from somebody forcefully with the aides of arms, that is armed robbery. The police have turned themselves to be armed robbers on the road", he purported.