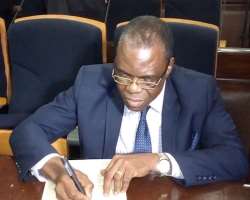 The Nigeria Judiciary witnessed a new helmsman as the Country's Chief Justice, Justice Tanko Muhammed, swore in Justice John Tsoho as the acting Chief Judge of the Federal High Court of Nigeria.

Justice Tsoho is replacing Justice Abdul Kafarati who retired from the Nigeria's Judiciary this week.

Before a person can become substantive Chief Judge, the Nigerian Constitution in Section 250 provides for the procedure. Justice Tsoho, from Benue State, takes over from Justice Kafarati, whose tenure ends on July 25.

Justice Tsoho will continue to function in an acting capacity until his nomination by the National Judicial Council (NJC) and his nomination confirmed by the President and subsequently by the Senate, as provided in Section 250(1) of the Constitution.

Meanwhile The Chief Justice of Nigeria (CJN), Justice Tanko Muhammed has praised the retired Chief Judge of the Federal High Court, Justice Abdul Kafarati, for his contribution to the country's jurisprudence and service to the judiciary and the nation.

He spoke on Friday in Abuja at the swearing-in of Justice Tsoho as the Acting Chief Judge of the Federal High Court of Nigeria.

“I know you as a welfare person, so work towards better welfare for your Judges” Justice Tanko Mohammed said.

“Inculcate the habit of visiting other divisions under you; sit with your Judges to find solutions to problems identified”

“I urge you to be selective in appointing Judges. Find out about their characters before appointing them ” he said.

Justice Tanko also urged the acting Chief Judge to elevate the Judges so as for them to feel sense of belonging.