Presidency has been briefed on New Boko Haram video on Sharibu: Garuba Shehu 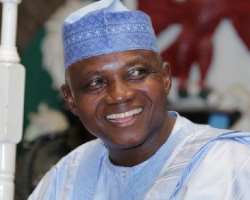 The Presidency in a swift reaction to a new video released by Boko Haram, showing captives was disturbing.

According to a statement by the Senior Special Assistant to the President on Media and Publicity, Mr Garba Shehu, urgent efforts must be made to secure the release of the captives, including Leah Sharibu and the last of the Dapchi schoolgirls still being held by the terrorist group.

The Presidency noted that the captives included humanitarian aid workers and a religious leader.

Garuba said, “The Presidency has been briefed by the responsible government agency about the disturbing video showing our citizens, the humanitarian aid workers held captive.

“Presidency has been given assurances that contact is being made and the captors are being talked to.

“Besides these aid workers, there are some others about whom this engagement is about — Leah Sharibu, a religious leader and all the others.

“These discussions have been ongoing even before this time and what this latest incident has done is to bring urgency to the efforts that the secret service is making.

“Government is making contacts, in the hope that the captors will see reason to not visit hardship or even harm on these innocent individuals. Government is working.” The Punch could not verify the claims made in the video.

Sharibu was among the 112 girls kidnapped from the Girls Technical College, Dapchi, Yobe State by Boko Haram members on February 19, 2018.

The Chairman, Chibok Community in Abuja, Mr Tsambido Abana, told The PUNCH he was not aware of Sharibu's reported death.

A member of the #BringBackOurGirls group, Aisha Yesufu, also declined comment, saying she could not verify the video.

CAN spokesman, Pastor Bayo Oladeji, said the Christian body was trying to verify the claims in the video, adding that he would issue a statement on Friday (Today).

“We have asked our contacts in Maiduguri to find out about Sharibu's condition and once we have the right information, I would issue a statement,” he added.