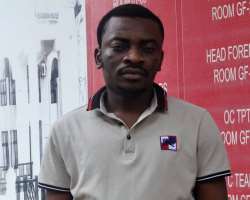 The Economic and Financial Crimes Commission, EFCC secured the conviction of one Asuquo Happiness, for Internet fraud to the tune $17, 000.

Asuquo who was arrested in June 2019, at Gwarinpa Estate, a suburb of Abuja, following intelligence report with regards to his fraudulent internet activities was convicted today by Justice N. E Maha of the Federal High Court, Abuja

In his statement, Asuquo admitted to have fraudulently obtained the sum of $17,000, about N6, 012, 000 from one Jean Persall, an American citizen, via internet chatting.

The charge against him reads: “That you, Asuquo Happiness, sometime in June 2019, at Abuja fraudulently impersonated one American citizen by the name ‘James Bud’ on internet and you obtained the sum of $17,000 from one Jean persall, an America citizen and you thereby committed an offence contrary to Section 22(2)b (II) of the cybercrimes prohibition Act, 2015 punishable under Section 22 (2) (b) (iv) of the Act.”

He pleaded ‘guilty’ to the one count charge preferred against him based on plea bargain agreement reached with the prosecution.

Defence counsel, Rose Mbata, however, confirmed the plea bargain with the prosecution.

Justice Maha, thereafter, convicted the defendant as charged and fixed August 2, 2019 for sentencing.