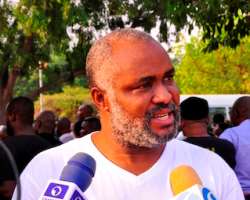 About noon today, Great Britain would have officially formalised modalities to have a fresh prime minister to take over from the immediate past leader and only the second ever woman premier after Mrs. Margret Thatcher in the person of Mrs. Theresa May.

Precisely around noon on July 23rd 2019, Mr. Boris Johnson was announced as the winner of the two way contest between him and the foreign secretary Mr. Jeremy Hunt. Boris Johnson who was at a time the flamboyant mayor of London who would go on to become his nation’s foreign secretary under his predecessor, won the contest with what is statistically regarded as a convincing margin of 92, 153 votes to 46, 656 with 6690 of the vote. The media reported that there was 87.4% among 159, 320 party members.

In his acceptance speech which one media reporter described as being made in his’ characteristically flippant’, manner, Johnson who has a unique kind of hair simular to President Donald Trump if USA averred that even amongst his ardent supporters who voted for him, he knew it from his heart that some would still be in shock over what they had just done which occasioned his emergence as the next leader of his conservative party which ipso facto would culminate in his coronation as the next occupant of number 10 Downing street with effect from Wednesday July 24th2019. No 10 Downing street London is the World's most prestigious residential address.

Boris Johnson said that at a pivotal moment in history, his party must show its “historic ability to balance competing instincts – marrying the desire to maintain a close relationship with the EU, with the desire for democratic self-government in this country”.

He reminded his audience of ministers and party staff of his campaign mantra: “Deliver Brexit, unite the country and defeat Jeremy Corbyn.”

Pointing out that this spelled “dud”, he joked that the final e – “energize” – had been left out. “I say to all the doubters: dude, we are going to energize the country!’”

The result was reportedly announced by joint chair of the backbench 1922 Committee, Cheryl Gillam. Her colleague, Charles Walker, first urged MPs to be “kinder” to the new leader than they had been to Theresa May.

As captured by the British press, Brandon Lewis, the Conservative party chair, introduced the slick event at a conference centre in Westminster, saying the contest had shown that his party was fundamentally united.

Johnson will not take office formally until Wednesday afternoon. Theresa May will face her final prime minister’s questions in the House of Commons before tendering her resignation to the Queen as demanded by longstanding traditions.

Johnson will then go to Buckingham Palace himself for his appointment to be confirmed – before being driven to Downing Street to give a speech in front of the black door of No 10 as disclosed in a uniquely fantastic news story written for a well established British press. Boris Johnson like this Writer is a Journalist.

The media is also awash with the apprehension that Johnson takes charge at a perilous political moment. The Conservatives’ wafer-thin parliamentary working majority is expected to be eroded further next week – to just two – if the Liberal Democrats win the Brecon and Radnorshire byelection, the media wrote.

Johnson according media observations of the changing fortunes of politics of UK vis-a -vis the unfulfilled Brexit vote has faced a furious internal revolt even before arriving in Downing Street, with several key cabinet ministers, including the chancellor, Philip Hammond, saying they will resign rather than serve under him.

They, said the media, have been alarmed by Johnson’s insistence that he is willing to countenance leaving the European Union without a deal on 31 October, rather than postpone Brexit once again – even if that meant proroguing parliament, says the media. It would be recalled that EU parliament with new legislators seem willing to extend the deadline for Brexit just so a no deal Brexit is avoided.

Boris Johnson is no doubt a political child of circumstances given the scenarios that played out that forced his predecessor into an early resignation because she could not galvanize enough congressional votes to deliver the Brexit in accordance with the deal she secured from the European Union which most of her colleagues view as unfriendly to Britain.

However, he is one of the few privileged individuals to have emerged on the political scene well prepared for the job that he loves so much which he has already achieved as at the time of writing this opinion piece which basically sets out to highlight the urgency of the now for African leaders to work out better deals with Britain under his leadership.

Alexander Boris de preffel Johnson, known professionally as Boris Johnson was born on June 19th1964 at upper east Sid, New York, United states and had privileged education at Eton and Oxford whereby he read classics. He is a father of 6 children and in Africa he would be considered as a highly responsible father.

His birth with a silver spoon is not the only privileges that he has won for himself. One key privilege that Boris Johnson has already won for himself is that the Queen of England has shifted her vacation for his sake just so that she could host him as tradition demands before he is sworn in as the prime minister of Great Britain.

Royal experts Katie Nicholl said the Queen has had to postpone her annual trip to Balmorals in light of the current political upheaval. Aside this shift in the Queen’s holiday, the new prime minister of Britain is also starting on a high notes with the United States of America whereby Donald Trump, the maverick leader of the free world has already described him as the Trump of Great Britain. If Britain leaves EU it would need every economic partnership it can gather with the USA. Theresa May had whistle stops diplomatic visits to Africa just before she announced her voluntary exit from office even though she woyld remain as a parliamentarian.

Now, as an African watching all of these political developments in the United Kingdom from Nigeria, what should be of high consideration is exactly what Africa and Nigeria stands to gain during the periods that this freshly endorsed premier of Great Britain will be in office. GB is Nigeria's former colonial masters.

In 2017, the Punch wrote that the negative growth of the economy and low crude oil output has weakened Nigeria’s international trade with most of its partners, particularly the United Kingdom. This reinforces my call for strategic engagements with the new PM of GB.

Nigeria according to news reports recorded its first trade deficit with the United Kingdom since 2009, with merchandise imports from the former colonial master in 2016 exceeding shipments of Nigerian merchandise to it.

An analysis of international trade data from the National Bureau of Statistics showed that Nigeria imported N362.87bn worth of goods from the UK and exported N300.66bn to the European country last year, recording a negative trade balance or net export of N62.21bn.

Analysts said this was a reflection of the state of foreign trade in the country in 2016, in which imports out performed exports by N290.13bn as a result of the plunging revenue from crude oil exports. The country imported products worth N8.82tn and exported merchandise valued at N8.53tn.

“The terms of trade worsened in a way that the volume of exported products dropped significantly,” the Managing Director/Chief Executive Officer, Cowry Assets Management Limited, Mr. Johnson Chukwu, said in an interview with the media.

Before 2016, the data showed that Nigeria had recorded trade surpluses with the United Kingdom for six consecutive years, with the highest positive balance of trade of N1.11tn in 2012. The next Finance and economic of Muhammadu Buhari is expected to work out how these tides can be overturned to at least balance our trade volumes with Great Britain under Boris Johnson.

Britain under Boris is also needed to play bigger role in the most pressing security challenges confronting the continents in Libya and West Africa beginning with the threats posed by boko haram terrorists and other armed islamists in places like Mali, Chad and Cameroon and it's epicentre being Nigeria. James Blake has this to say about terrorists in Mali in his piece of March 29th2019.

“On Saturday, 100 armed men dressed as ethnic Dogon hunters stormed the village of Ogossagou in central Mali. They killed more than 160 ethnic Fulani civilians, including children and pregnant women, and burned many homes to the ground. Reporting is scarce, but it seems that attackers also struck the neighboring town of Welingara, which is also Fulani-majority. The Mali government blamed a Dogon self-defense group called Dan Na Ambassagou for the incident. The group denies involvement.”

“The attack is not a one-off incident. Rather, it is the latest and most deadly episode in a campaign of systematic violence against Fulani herders, who are being forced to flee their land. On January 1, for example, assailants struck the village of Koulogon, killing 37 people from the Fulani community. The thousands of international troops in the country—including from the G5 Sahel counterterrorism force (comprising Chad, Burkina Faso, Mali, Mauritania, and Niger), from France, and from the United Nations Multidimensional Integrated Stabilized Mission in Mali (MINUSMA)—need to act now to prevent further incidents of ethnic cleansing, retaliatory attacks, and the targeting of vulnerable communities.”

The researcher stated also that Central Mali is populated by, among others, the Fulani, the Dogon, and the Bambara. The Fulani are a primarily Muslim ethnic group of seminomadic herders, he notes and i add that Nigeria as i write is facing massive terrorism by armed Fulani herdsmen.

But this international analyst stated that across West and Central Africa, as many as 38 million people belong to this group. The Dogon, a group of as many as 800,000 who practice a polytheistic religion (a small number practice Christianity and Islam), are largely based near the border with Burkina Faso and are mainly farmers. The Bambara, meanwhile, are the largest group in Mali. Most are primarily farmers as well and many practice Islam, although others follow traditional belief and worship ancestors.”

Other publications have stated that Islamist groups in Mali came to the fore after rebels of the Tuareg tribe—an ethnically Berber people concentrated in the Sahara—began an offensive against Malian government forces in January 2012.

Tbe repirts say at the start of the Tuareg Rebellion, Islamic groups including al-Qaeda in the Islamic Maghreb (AQIM), the Movement for Unity and Jihad in West Africa (MUJAO), and Ansar al-Dine (AAD), fought alongside the rebels against Malian security forces.

The researcher noted that frustrated with the government’s inability to quash the Tuareg’s secession, the military staged a coup after three months of fighting.

"In the political chaos that ensued, the rebels, spearheaded by the National Movement for the Liberation of Azawad (MNLA), established control in the north. Shortly after, AQIM, AAD, and MUJAO joined forces to expel the rebels from northern Mali", the reporter stated.

Boris Johnson needs to be convinced to step up military assistance to Nigeria and other West African countries waging war against terrorists and must put pressure on the Nigerian government to respect human rights and stop the ethnic cleansing by Fulani armed militia and also balance his security appointments.