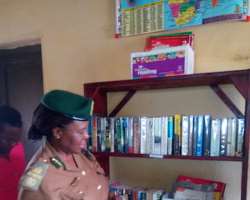 Speaking Tuesday, at the joint commissioning of the Kwale, Agbor, Sapele, Warri and Ogwashi-Uku Prisons, the Controller General of Prisons, Alhaji Ja'afaru Ahmed who appreciated the NGO for establishing a library in Prisons across the state said it would help inmates to upgrade themselves.

Represented by the Assistant Zonal Coordinator in charge of Zone G, comprising five states, Mrs Tina Okereke, said the donor has made not only the inmates but the prisons proud.

In his address, the Deputy Controller of Prisons in charge of Medium Security Prison, Ogwashi-Uku, DCP Frank Okonkwo, said the management team is happy with the establishment of the library, "No doubt, this will go a long way in meeting the academic and knowledge, reformatory and rehabilitation needs of inmates and roles of this prison as an institution" just as he appealed to the donors and other well meaning Nigerians to provide tools and materials for the workshop to help in the training of inmates in various vocations.

In her speech, the Chief Executive Officer (CEO), of ZODML Mrs. Ego Mbagu, disclosed that the NGO which is purely a trust fund believes that the library is a platform through which the inmates could develop themselves and build their mental and social wellbeing.

She expressed optimism that the books in the library in line with the prison reforms would positively influence the character, moral and actions of the inmates and make them act rightly.

"It is our goal to cover all Prisons in the country and we hope that the library materials which includes textbook, reference books, fiction, non-fiction materials, would help the inmates through their rehabilitation process unto the path to a better future".

One of the inmates who spoke to journalists commended the NGO for having them in mind.

He said the library would help them overcome loneliness and broaden their knowledge even as he called for the establishment of schools in the prison as obtainable in other prisons across the state.