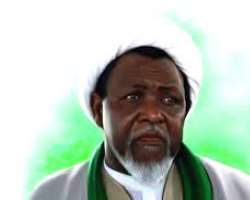 It is very embarrassing to read in a statement credited to the SSA Media to President Buhari, Garba Shehu that the Presidency does not have a hand in the continued and illegal incarceration of the leader of the Islamic Movement of Nigeria, El Zakzaky and that those protesting his continued incarceration should allow the court determine his fate. It smacks logic for a Presidential aide all in the bid of defending his principal to release such a statement without considering the dent it would have on his personality and the government he is effortlessly defending.

It is the height of insensitivity, insincerity, irresponsibility and hypocrisy on the part of Garba Shehu to release such a press statement despite the fact that the House of Representatives even decried the illegal incarceration of El Zakzaky and others while calling on the Federal Government to obey court orders. He has shown how incapable he is when it comes to image rebranding because, the product he is trying to advertise to the people is unsellable.

There is no gainsaying in the fact that President Buhari has shown his crass disregard for the rule of law since the inception of his government in 2015 by selecting which court judgements to obey or not and this recent statement of Garba Shehu has shown that he lacks basic knowledge of the law and that he does not have the modicum of the understanding of governance while corroborating the point of the critics of his boss that he is a mere paper-head tiger placed on a chair while the administration of the country is being run by some persons at rocky heights with praise-singers and sycophants like Garba Shehu dishing out statements concocted with evident lies and deceit just to confuse the populace.

It is still fresh in our memory how the figurehead Attorney General of the Federation who is suppose to be the Chief Law Officer of the Federation and at the same time expected to be the defender and upholder of the Constitution came out openly to justify the unjust incarceration of one of those this government has refused to release despite substantive court orders, Sambo Dasuki by stating that "obeying the court is not the issue per say. Are we going to take the issue of an individual more important than that of the people? The government's main responsibility is for and about the people... So, you have to weigh it bases on that; the rights of an individual or the rights of the people."

The statement credited to Garba Shehu does not only raises constitutional and democratic questions but portray our democracy in bad light and signal a greater danger for our existence as a people. The crass ignorance shown by Garba Shehu in his statement would force all persons with discerning spirits to educate him that the case of El Zakzaky's has already been determined by law courts and that it now lies on the Federal Government which control the powers of coersion to execute courts judgments without delay as stated in Section 287 of the Constitution of the Federal Republic of Nigeria 1999 (as amended).

It is instructive to note that since several courts have granted bail to El-Zazzaky since 2016, the order should be obeyed for rule of law to be so upheld.

In all, Garba Shehu, ignorantia juris (legis) neminem excusat meaning ignorance of the law excuses nobody. That you are ignorant of the law and grossly unaware of how society is run should not spare you from being chastised for the ignorance-driven statement you wrote on behalf of your master because, a half-educated child is a lost child and a mis-educated child is more deadly than Ebola. Hence, the need for you to be tamed.