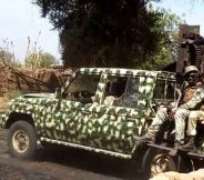 Our correspondent gathered that the terrorists at about 6.30pm, waylaid some commercial vehicles along the road near a military checkpoint and using them as a cover to open fire on the soldiers.

A villager was killed in the gunfire while two others were injured; five soldiers said to be at the checkpoint also died while trying to repel the terrorists' attack.

Military sources, who could not yet reveal the names of the captain and soldiers, said a colonel was reported to have been killed too, adding that the soldiers were attached to the 29 Task Force Brigade in Benisheik under the 7 Division, Maiduguri.

The corpses of the said colonel, captain and soldiers are reported to have been deposited at the morgue of the Nigerian Army medical facility in Maiduguri.

A military source said, “On Wednesday during the Boko Haram attack, there were commercial vehicles on the road. A Regimental Sergeant Major, who was travelling to Maiduguri, was intercepted during the attack, and they killed him.

“Actually, the fighters also attacked some soldiers who were on duty at a checkpoint, bombarded their formation and killed some of them.

“It was in Jakana. The RSM was on leave and he was just coming in a casual dress. He was not in uniform. He was returning to Maiduguri. The fighters attacked some commercial vehicles. They even burnt a Toyota Hilux.

“They didn't know they killed officers because they were not in uniform. The General Officer Commanding (Maj Gen Abdulmalik Biu) was there (Jakana) on Thursday for about three hours.

The acting Director, Army Public Relations, Col Sagir Musa, could not be reached for comment as his line rang out.

A text message also sent to his line had yet to be replied to as of press time.