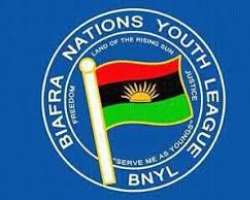 Biafra Nations Youth League,BNYL, has called on the people of the Southeast and South south to leave the north following calls by northern elders forum and Coalition of Northern Groups, CNGs call on the Fulani people to leave the South and return to the north.

In a statement signed and issued by the Chief Press Secretary of BNYL, Comrade Kufre Obot, the group appealed to the people of their region to return home or risk being killed after 30th July's ultimantum by CNGs.

BNYL believes that it was because of its threat of retaliation, paradeventure the people of the old Eastern region are harmed in the North. It prompted the call for Fulanis to leave the south by Northern elders and CNGs. Speaking in Uyo, Akwa Ibom State, Comrade Kufre Obot said the group met in a closed door meeting to react to the statement credited to the Northern elders and youths, which has necessited the call on the Easterners to return home before 30th July. "We met in a closed door meeting today after reading the statement from northern elders and their CNGs. We resolved to equally call on the Igbos, Efik-Ibibio, Ejagham, Ogoni, Uhrobo, Ijaw and other tribes from the South East/ South south to return home before the 30th ultimatum".

The BNYL vowed not to tolerate killing of any Easterner in the north even as it stated that the call for Fulanis to leave the south was a signal "it is a signal and we are ready to face it in whatever way they want it" the group said.