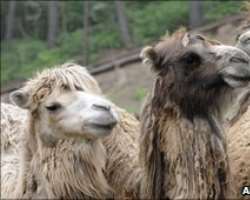 A Bengal tiger and two camels have gone missing after a truck and a trailer they were travelling in were stolen near Montreal, Canadian officials say.

They say the vehicles were snatched as the driver stopped for the night at a local motel.

Police believe it was an “opportunity crime”, with the thieves being unaware what the cargo was.

The animals, described as “delightful”, were being transported from Nova Scotia to a zoo in Bowmanville, Ontario.

“I don't think the thieves had any clue about what was inside,” zoo director Michael Hackenberger told Reuters.

He said all three animals – Jonas the tiger and camels Todd and Sean – were trained and friendly.

The director also expressed concern that the animals could die of dehydration in the hot weather unless they had water soon.