Thank You Imolites For Rising In Defence Of Madumere

Their Mischief Shall Return Upon Their Head
By Kenneth Nwoke, The Nigerian Voice, Owerri 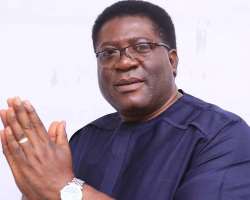 We are not unaware of the quarters these arrow of mischiefs, defamations and blackmail orchestrated against the person of Madumere is coming from.

While we vote to uphold rights and freedom of expression as adoptable in the civilised societies, it is abominable to hide under any guise to maliciously defame Prince Madumere.

We are happy that we are only battling with few deviants who have constituted themselves into eternal enemies of Imo State; and there are handful of them and Imo people know them.

What is important to us is that His Excellency, the immediate past Deputy Governor of Imo State, Prince Eze Madumere is with Imo people and Imo people are with him.

Therefore, this effort is first to commend the good people of Imo State at home and in diaspora for standing up in defence of Madumere, by puncturing all tissue of lies lined up against the patriotic and illustrious son of the state. His last Birthday messages from the state and all over the world in honour of Madumere speak volume.

We have taken note of the activities of a quark in the ink job, a hireling of Chief Rochas Okorocha and his son-in-law, Uche Nwosu, Mr. Jones FCC Onwuasanya. Amongst the harvests of atrocious defaming materials published mostly on Facebook and other social media platforms. We wish to state that Prince Madumere is not worried about constructive criticism because of its puritan effects in both state actors and the society at large. Anything short of this is nothing but a smear campaign, which has continued unabated.

To this end, Onwuasanya is expected to furnish the public with what he knows about conviction of Prince Eze Madumere and the homosexual story even appreciably as he had boasted to give further details.

We hereby state unequivocally that His Excellency, Prince Eze Madumere, has never been, neither has he ever been linked to any repulsive practice and shall never entertain such, having come from the Royalty and custodian of customs and traditions of the people; a good family man, Christian and as a very decent man who has been a role model to many youngsters in the state and even beyond the shores of Nigeria.

Therefore, for Onwuasoanaya to have the temerity and the obsess effrontery to so accuse, probably to the satisfaction of his paymasters, we believe he must also have the evidence and the will to prove his super story. The onus is on the accuser to prove his case beyond reasonable doubt.

Again, we heartily salute the tireless and relentless effort of Imolites in disinfecting the air of the pollution of lies oozing out from these agents of destruction whose ends are nigh.

For the records, Prince Eze Madumere is more than qualified in all ramifications and he has got the temperament. In terms of coordination, Madumere has been challenged by the Federal government, having been involved in some state and national assignments. Imolites are also aware of Madumere’s magnanimity, including Jones who has been a beneficiary of Madumere’s largesse during his pitiable hunger situation.

The greater battle had taken place by the special grace of God, and Imo people prevailed. We are not unaware that we may have only scotched the serpent, surely it is struggling for life and there is no doubt that the people shall crush it.

For the records, Madumere has demonstrated the highest level of leadership laced with integrity. Madumere remains a founding member of All Progressives Congress. During the tempting period, he remained in APC and the hope of its loyal members. If Madumere could not be frustrated by Okorocha and his co travellers out of the party when the chips were down, then it is too late in the day for any blackmail to stand. The leadership of the party are aware of how Okorocha traded away the party and necessary measures have been taken. Till date, his confused disciples are still battling with their political identities shrouded in puzzle. Since Okorocha remains suspended for anti-party activities with his hirelings, the only acceptable logic is that they do not have the locus-standi to speak on anything at all about the party.

We believe the Holy Scriptures where it says in Deuteronomy 28:7: “They will attack from one direction, but they will scatter in seven ways.” And for those who have constituted themselves into the enemies of the people, the Psalmist says: “…their mischief shall return upon their own head, and their violent dealing shall come upon their own pate.”