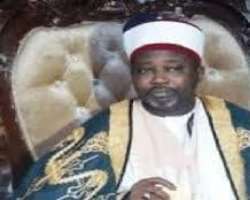 The Emir of Gwoza, Gwoza LGC of Borno State, HRH, Alhaji Mohammed Shehu Timta, has finally heed to several calls by governemnt and his people to return to his ancestral home and royal palace in Gwoza town which was renovated along with other residential and public buildings destroyed by the Boko haram insurgents following relative peace and security that returned to the area after five years of displacement from the kingdom as a result of the Insurgency.

As a sign of joy and hope, mammoth crowd gathered at Pulka town and major streets of Gwoza town Monday to give their own royal father, a first class Emir a rousing welcome.

They gave him a colourful celebration with spontaneous display of Gwoza culture at the emir’s palace.

Addressing the people, Governor Babagana Umara Zulum represnted by the State Deputy Governor, Usman Kadafur said the return of the Emir back to Gwoza town to stay with his people symbolizes the return of civic authority in the emirate.

The governor added that his administration will continue to give high priority, respect and dignity to the traditional rulers while describing the return of the royal father as a “symbol and pride of every society’’.

“I felicitate with the Emir and people of Gwoza over the official relocation and return of our Emir back to his palace after years in Maiduguri. This administration will not afford to toy with the people of Gwoza and the traditional institution.

“I therefore call on you to support the Emir and security agencies to end insurgency in order to move the emirate forward.

"The government is not unaware of the numerous challenges related to the relocation of the Emir. We are going to accelerate the reconstruction and rehabilitation of Gwoza General Hospital, water sources and other public utility buildings, among others", Zulum said

According to the governor, the government will fast-track construction of mega schools to enable the students resume classes.

Speaking earlier, the royal father HRH, Alhaji Mohammed Timta said he voluntarily returned home to build confidence and encouraged his subjects to also return home and go back to their normal livelihood.

“Dozens of my people ran for their lives and became Internally Displaced Persons in Maiduguri, Adamawa, Abuja and Lagos, while some fled to Cameroon.

“Today is my happiest day in life as I officially returned back to my domain after being displaced by insurgents. I therefore call on all people of Gwoza to come back home, so that we will rebuild our communities”, Timta said.

He also urged the state government to construct more tents in the town for the IDPs living outside to return and rebuild their livelihood.

It will also be recalled that Timta had last weekend appealed to President Muhammadu Buhari and the security agencies to restore mobile network in the town, pointing out that, without communication, life will be difficult for the people.

Speaking also, Senate Ndume appealed to security agencies to beef up security in the area to protect farmers from being attacked by the Boko Haram insurgents.

Ndune further urged the military to intensify its operations around the troubled Mandara Cameroon Mountains to clear the remnants of the Boko haram insurgents in the hills and it's surrounding to enable the residents of the area return to their villages to farm..

It is in history that in August 2014, Boko Haram captured Gwoza town which had a population of 275,000 people and declared it the headquarters of its caliphate before it was liberated by the Nigerian military when it was reported that the Boko haram insurgents allegedly killed more than 27,000 people and displaced over 1.8 million people in the entire north east sub region.