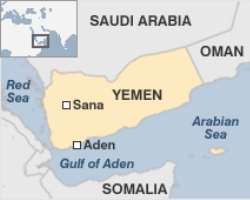 Gunmen have attacked the headquarters of Yemen's Political Security Service in the southern city of Aden.

At least two members of the security forces have been killed. Unconfirmed reports said up to 11 people, including six security personnel, were dead.

Heavy exchanges of gunfire continue and smoke is rising from the area.

Local officials blamed the raid on al-Qaeda, which has urged supporters to take up arms against the government in response to a crackdown in the east.

During Saturday's attack several suspected militants were set free from the intelligence service's building, which is situated in the al-Tawahi district near the city's port, the officials added.

Rocket-propelled grenades and machine guns were being used by the militants, who pulled up outside the heavily-guarded building in two cars at around 0740 (0440 GMT).

The attack caused a fire at the building, which officials said was being brought under control. The military has sent troops to the area.

Yemen's government is facing three different threats – from al-Qaeda, southern secessionists, and a rebel movement in the north – although it has it has called a truce with the latter.

Al-Qaeda in the Arabian Peninsula (AQAP), formed in 2009 by a merger between two regional offshoots of the Islamist militant network in Yemen and neighbouring Saudi Arabia, has taken advantage of the instability and established strongholds in the country's largely autonomous tribal regions.

It has claimed to have been behind a number of attacks in the two countries over the past year, and has been blamed for attempting to blow up a US passenger jet as it flew into Detroit on Christmas Day.

Earlier this week, the group called on tribes in eastern Yemen to help it “light up the ground with fire under the tyrants of infidelity in the regime” in retaliation for alleged air strikes in the region.