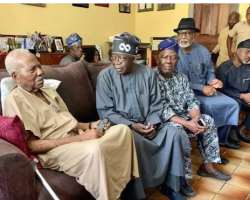 The first person that broke her death to the press was Yinka Odumakin. "She was killed by SUSPECTED herdsmen." Yinka Odumakin says an eye-witness told him.

What does Yinka do after informing the press? He picks up the same phone and calls his good friend and brother, Femi-Fani Kayode, to tell him that the Fulani herdsmen had done it again. This time, even, to a daughter of a prominent elder.

Fani-Kayode quickly calls the Aare Ona
Kakanfo of Yorubaland (the defender of the Yorubaland), Gani Adams, who himself is out of the country and pleads with him to abandon every business he has and rush home in order to lead the war against the Fulanis.

Does this look somehow to you?
Let me point out something before I go further.
I fear to travel on our highways these days. This is me acknowledging the fact that there has been rising insecurity in the nation. I don't look forward to traveling by road to Abuja, Lagos or even Bayelsa. It is agba-ekpere-chi situation these days.

I will also acknowledge the menace the Fulani KILLER herdsmen have posed on our highways. For a purpose, I capitalized "killer", as an indication that there are still a population of Fulanis who do their legitimate businesses, and who are as disturbed as you and me because their own lives are also at risk, besides the fact that the bad ones among them cast them in bad image.

Now, the above scenario is me openly acknowledging the high insecurity in the nation, and my not also exonerating the killer herdsmen.

I am however sad that it has become so convenient to pin every armed robbery and kidnapping on them. The narratives have become so stereotyped that once there's any attack anywhere, it must be herdsmen!

In the past, long before we started associating the herdsmen with crimes, travellers from Lagos to the East, for instance, would always have their hearts in their hands when they got anywhere around Edo. The Benin Bye-pass, for instance, was a nightmare. People gave it to the Edo people that they were too brutal and robbed, kidnapped and killed on that road. That was the same with all the other major highways; there were attacks on all these roads.

I want to ask: What happened, for instance, to all the robbers and kidnappers of Edo origin? Have they all suddenly retired and left the business for the Fulani herdsmen?

Have all other criminals from every other tribe abandoned crime for the herdsmen?

I traveled with some colleagues recently to Akwa Ibom. We took the Ogoni road from Port Harcourt. And that's one road that the faint-hearted cannot pass. At every pole, there were policemen, just because of the rate of kidnapping and robbery on that road. We had our hearts in our hands. Fortunately there was no incident. But on coming back, we decided to avoid the road. Everyone knows the people that operate on that road...the same with the East-West road. These days, these are the only two roads that people look beyond the herdsmen when there's an attack on them. Every other road? It must be herdsmen!

The implication of this sad development is that we help to heat up the nation, and exacerbate, albeit inadvertently, an already bad security situation.

Again, in cases, where the culprits might not truly be herdsmen, our hasty conclusion that they are the culprit shifts focus from the real culprits, who might even join in the chase for the said SUSPECTED herdsmen. The Ozubulu church killing is still fresh in our minds. Just like the killing of the two reverend fathers and 17 worshippers in Benue. All these crimes were hastily pinned on herdsmen with eye witnesses swearing with their lives that they saw them and were sure they were the ones. There have been hundreds of such other cases.

Recently, there was a video trending online of herdsmen attack on a highway. One video in which the narrator narrated in Warri pidgin about the attack. The funny thing is that the first time I saw the video, the person that shared it claimed the incident happened on the East-West road, Rivers State axis. And obviously if it truly happened there, no one will ever pin it on herdsmen. But I woke up the next morning to see that the same video I watched the previous night had changed narrative, with someone sharing it as herdsmen attack on commuters along Kaduna-Abuja road. Few hours later, the same video trended at some other platforms as herders attack on Asaba highway. ..and yet again, it trended as attack by herders at Lagos-Ore road. One video!

Please, Nigerians, while government deserves all the sticks for the high insecurity in the nation, it is high time we took a critical look at ourselves again to see whether we contribute to this in one way or another."""